With an expanding array of global accolades being notched into its belt, the Ioniq 5 looked strong on the pre-event form guide.

And its fortunes only became stronger, on merit of performance, once COTY got underway. Its landmark status, for spearheading the electric Ioniq sub-brand and as the first model spun off its maker’s dedicated E-GMP platform, brought ample COTY equity, in terms of both innovation and technology. It’s an originator, set to spurn, at most recent count, some 17 new models across the Hyundai/Genesis fold by 2030 at an estimated investment of A$22 billion.

Then there’s Ioniq 5’s inimitable design, one that’s as commanding as it is utterly distinctive. Brave and downright ballsy, though, was Hyundai’s decision to prescribe an oversized hatchback form, rather than a safer and oh-so-predictable SUV-cum-crossover proposition. The Ioniq 5’s deftly executed sense of adventure, bringing something that feels genuinely fresh and distinctly different to the motoring landscape, wasn’t lost on COTY’s judging panel. 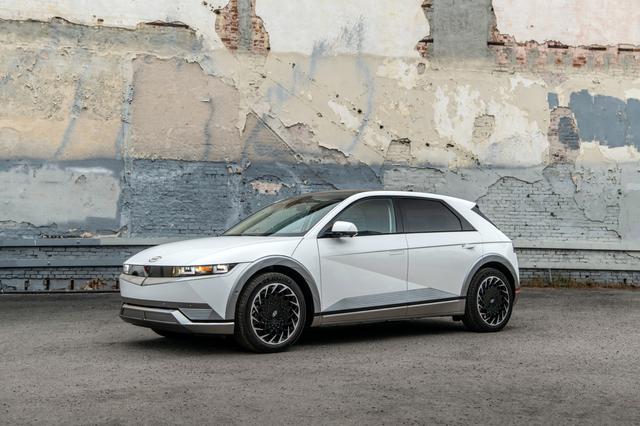 “I love that it’s not trying to be an SUV,” Dan noted. “Yet the ride height, the AWD and spaciousness do lend an SUV-like utility.”

The plaudits kept rolling on as judges climbed through the Hyundai’s cabin during walkarounds. While sharing certain hardware DNA with rival Kia EV6, the Ioniq 5 is different, joyously bright and conspicuously dipped in space-age kitsch. It’s a theme that deliberately avoids those well-trodden sporty or overly dark-tinged, premium-by-the-numbers stylisms.

“The cabin oozes showroom appeal and sheer wow factor,” Alex added. “Outward vision is excellent though the front seating position is good if not ideal…” Many judges agreed – you sit ‘on’ the Ioniq 5 rather than ‘in’ it as you do in the EV6.

Packaging is excellent. Its jumbo hatchback form sculpts impressions of airiness and roominess its key Korean EV rival couldn’t quite muster and judges noted its build quality andmaterial execution is a little more uniform, from windscreen to boot lid, than the EV6 manages.