The luxury electric SUV has inherited much of the exterior and interior design of the original GV70 which had been praised by many car lovers for its sophisticated design.

But some changes here and there helped the electrified model look much more dynamic and athletic than its previous model.

For instance, Genesis used what they call the ‘G-Matrix’ pattern on the front grille of Electrified GV70.

On the rear, the carmaker removed the lower grille and instead unified the whole body with single material and color which helped accentuate the smooth body line and made it look much bigger.

As for the wheels, there is the 19-inch wheel and the new 20-inch EV exclusive wheel to choose from.

Once inside the car, the panoramic sunroof and lowered center tunnel in the backseats gave more openness and made moving around inside the car convenient.

It used the same double knob design for its driving gear and center display controller applied on its original GV70 model which for non-Genesis drivers could take some time to get used to.

Unlike other EVs that have tablet-like center displays, the Electrified GV70 has its center display on the upper part of its dashboard, a driver-friendly feature that saves the effort of having to look down.

The backseats of the GV70 were spacious with enough headroom and leg space, and its seating angle could be modified to allow a more comfortable seating position.

During a test drive of Genesis Electrified GV70, on a 120-kilometer route from Hanam, Gyeonggi Province to Gapyeong, Gyeonggi Province, the car changed the driver’s seat to massage mode once it had been moving for an hour.

If the driver chooses sports mode to drive in, the driver seat tightens up around the body.

The car’s dual electric motor boasts a maximum of 435 horsepower and reaches 100 kph from zero in 4.2 seconds when driven in sports mode.

On the steering wheel, there are buttons to control the level of regenerative braking and also a boost button which when pressed, shows an outstanding spurt of speed.

Genesis Electrified GV70 offers a very quiet driving experience thanks to its noise control system that eliminates road noise seeping into the car.

But when driving on curvy roads around hills, the car seemed to lack lower central gravity to show smooth and stable cornering performance.

The car also had some smart automotive driving features implemented on its adaptive cruise system such as change of lanes when the turn signal is on.

Equipped with a 77.4 kWh battery, Genesis Electrified GV70 can drive up to 400 kilometers once fully charged.

The car’s charging door is located on the front grille which means the driver has to bend down to connect the car to the charging station and can only be parked head-on. 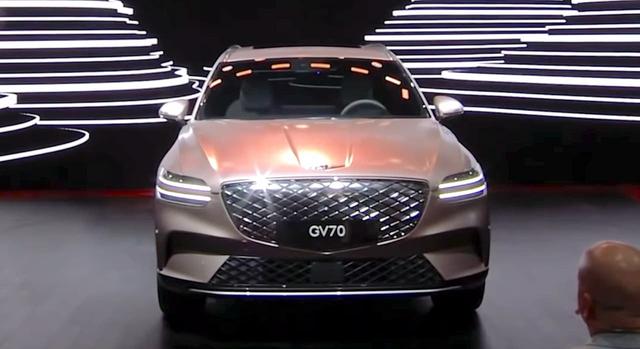