Next time you're driving through a Louisville suburb, pay attention to the street poles — they may be watching you.

A growing number of neighborhoods in the East End are joining thousands of others across the U.S. to purchase license plate cameras that snap pictures of any vehicle that goes down their streets.

They also take pictures of faces as well.

Subdivisions such as Polo Fields and The Woods of St. Thomas swear by them, saying they've helped cut down on car break-ins and porch pirates.

Here's what you should know about the technology and the concerns around it:

How do license plate readers work?

The solar-powered, motion-activated cameras snap pictures showing the license plates and other identifying features of every vehicle that enters the neighborhood, or any person or bicycle that happens to be nearby when the recording starts.

From a laptop, those time-stamped images can be pulled up of each vehicle's make, model, color and license plate.

The images are available in a searchable database available to the neighborhood group paying for service. 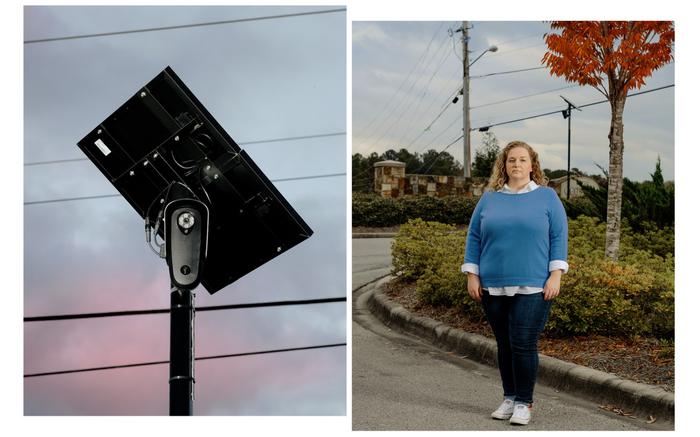 How much do license plate readers cost?

Prices vary. The Polo Fields neighborhood association is paying $2,000 a year per camera to Flock Safety, an Atlanta-based company that markets automated license plate readers to communities and police departments across the country.

The subdivision has six cameras guarding its entrances.

The fear is this: Big Brother is watching you.

And that power can be abused, particularly when plate readers are in the hands of neighborhood groups and homeowner’s associations that lack the training or public accountability of law enforcement agencies.

Depends on who you ask. Some neighborhoods swear by them, and companies that sell them say they have the stats to back up their effectiveness.

Police believed she was driving a stolen car based on a Rekor Systems automated license plate reader hit, but it was a mistake, The Tennessean reported.

Two months earlier, the woman, who drove a 2012 white Dodge Journey SUV, was involved in a car accident the same night a white Dodge Avenger — a sedan — was stolen. The same officer took both reports that night and mistakenly included the Dodge Journey tag information with the stolen vehicle report.

Before confronting the woman, officers noticed a “mismatch” of the plate to the car but continued anyway. A spokesperson with the department told The Tennessean it “isn’t unusual” for the plate not to match the car.

Law enforcement agencies have also been caught abusing the technology:

Jonathan Bullington is an investigative reporter. Reach him at: 502-582-4241; JBullington@courierjournal.com; Twitter: @jrbullington.

Kala Kachmar is an investigative reporter. Reach her at 502-582-4469; kkachmar@courierjournal.com or @NewsQuip on Twitter. Support strong local journalism by subscribing today: www.courier-journal.com/subscribe.