At the recent Move America mobility conference in Austin, Texas, we heard a presentation from Chris Anthony, current chief executive officer of San Diego-based Aptera Motors. When last we reported on the Aptera 2e electric three-wheeler aero-pod that was poised to hit the streets in 2011, it was powered by an inboard 110-hp motor driving the front wheels to deliver a 0-60 mph time of 9.0 seconds and 200 mpg-e.

Instead of delivering cars, Aptera Motors, Inc. was liquidated in 2011. Then in 2019, the original founders Chris Anthony and Steve Fambro re-formed Aptera Motors Corp. with a crowdfunding campaign aimed at building a solar-powered electric car billed as "the world's first 'Never Charge' EV." But cloudy-climate drivers needn't fear, the car is designed to include battery packs good for 25, 40, 60, or 100 kWh, with the largest delivering 1,000 miles of range, presumably in pitch darkness. Color us super skeptical of the entire enterprise, but here's Aptera's pitch for its reborn solar-powered electric car, which the company reckons it can sell for $25,900.

The reconstituted Aptera moves the electric drive out to the hubs, to free up onboard space and to allow for torque vectoring. The small 50-kW (67-hp) Elaphe wheel motors shouldn't overburden the suspension with un-sprung mass. Front-wheel drive will be standard and is said to provide 0-60-mph acceleration time in the 5.5-second range, with an option to power the third rear wheel and bringing that time down to 3.5 seconds.

The one thing that's never changed throughout the Aptera (née Accelerated Composites) in its transition to a solar-powered electric car is its extremely light, extremely strong passenger cell comprised of just four composite parts. The fully assembled "body-in-white" weighs less than 800 pounds. Three-wheelers qualify as motorcycles, and enclosed three-wheelers dodge the need for helmets and motorcycle driving licenses, but Aptera swears it's going to meet all 700 NHTSA crash-safety requirements, not just the 38 that apply to cycles.

Toward that end, there's ample energy absorption in front and side-impact beams in the doors, but the high door sills and extreme curvature of the body side in multiple directions are said to help fend the Aptera off when struck by another vehicle. (It will remain to be seen if this design trades blunt-force trauma for whiplash-type injuries.) And the wind-cheating teardrop shape with fully faired-in wheels is said to now achieve a drag coefficient of 0.13 (down from the 0.15 claim for the 2011 Aptera 2e).

To dodge the drag of a traditional grille, radiator, and fan cooling system, Aptera claims to have devised a method of incorporating microfluidic channels in the composite resin skin forming the underbelly and sides of the car, and that it is capable of radiating heat much the way an animal's skin might. This is how the battery, motors, and solar panels are cooled. How such a system integrates with a cabin conditioning system is another question. 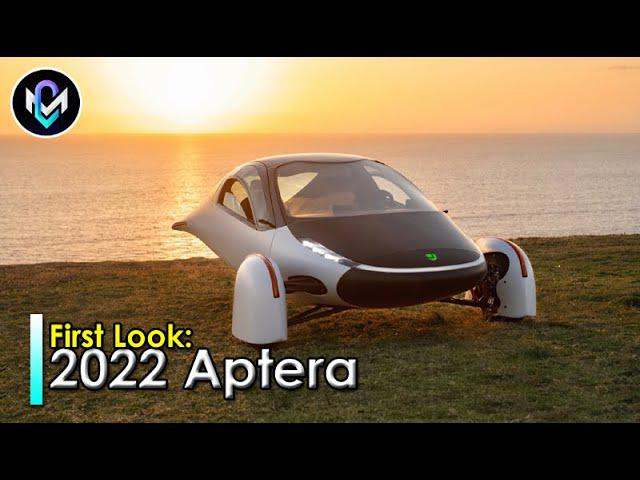 We have serious doubts about the efficacy of a purely heat-pump air-conditioning system working with skin radiation, so perhaps there's a condenser and fan for AC?

The ultralight bodywork, uber-slick aero, and tires with very low rolling resistance help make the Aptera solar-powered electric car four times more efficient than typical electric sedans, earning about 10 miles per kWh. This makes it hard to conceive of any customers opting for the 100-kWh battery with the solar array, except perhaps those planning marathon drives across vast dark expanses of Nunavut Canada or Siberia. But if that is your jam, be sure to check out Aptera's camp tent that mounts in the hatch opening and the pet restraint net.

The roof panel solar array will be standard on all models, and it is said to be capable of providing 20 miles of solar charge per day in sunny climates like southern California. Covering the hood and hatch with solar panels brings the total solar panel area to roughly 3 meters, which at today's 24-percent efficiency means they capture 700 watts of energy. This adds $900 to the price and increases the daily solar range to 43 miles. That's more than the average daily commute, which is how Aptera comes to reckon that (at least where it's usually sunny) daily commuters may "never charge" their car. (Jason Fenske of Engineering Explained checked Aptera's math in a recent YouTube video and found it to be slightly conservative.)

Aptera has retained Sandy Munro's Munro and Associates to apply its Lean Design methodology, which will have Aptera outsourcing the production of much of the vehicle. Final assembly will involve the marrying of six major subassemblies with the composite body: front and rear suspension modules (including motors), the instrument panel, the battery, and the interior.

Retail sales will be entirely online, and CEO Chris Anthony's dream is to one day meet local demand with small local assembly facilities close enough to the customer to enable factory pickup, thus solving one thorny problem: How to transport three-wheel vehicles (the current truck and train car-carriers lack a central rail to support the rear tire—this was a major factor in Volkswagen's decision not to produce the GX3 concept from the 2006 Los Angeles Auto Show after extensive chassis development by Lotus).

With minimal maintenance required of any electric vehicle, Anthony said his company embraces the Right to Repair movement. This involves manufacturers disclosing all repair and service procedures online to empower owners to service and repair their own vehicles.

Aptera will ship parts to customers worldwide. There will reportedly be a warranty program for getting things fixed, presumably at some established network of automotive service centers.

Anthony freely admits that global supply chain woes connected with COVID have delayed production, but he said the company is testing its "beta" prototypes and appears to be on track toward finalizing the production design this year and going to production in 2022, working to fill a backlog of 12,000 pre-orders.