Bentley has some big electrification plans.

By 2026 it’ll only sell electrified vehicles – be that hybrid or electric – and past 2030 it’ll only be making full EVs. Today, we’re going to be looking at one of the cars that kicks off this plan – the Bentayga Hybrid.

Combining the luxurious qualities of Bentley’s popular SUV with an efficient petrol-electric powertrain, the Bentayga Hybrid could be an indication of what we can come to expect from the Crewe-based manufacturer.

You may remember that the Bentayga Hybrid first made an appearance back in 2019, but quickly afterwards the entire Bentayga line-up was given an update.

It meant that the previous generation of car only went on sale for a short period of time before being removed, refreshed, and turned into the car we’re looking at here.

The Bentayga is no lightweight, measuring in at over two-and-a-half tonnes

The exterior has been given a light redesign, while the interior takes on a much-needed lift in terms of technology and systems.

It’s this latter touch that makes the biggest impact on the new Bentayga – but more on that in a bit.

The Bentayga Hybrid uses the same powertrain setup as its predecessor, which sees a 3.0-litre turbocharged V6 engine combined with an electric motor for a total output of 443bhp and 700Nm of torque.

Now the Bentayga is no lightweight, measuring in at over two-and-a-half tonnes, but this powertrain still manages to send this SUV from 0-60mph in 5.2 seconds and onwards to a top speed 158mph.

But the efficiency gains are there to see, too. Bentley claims that a full charge will allow for just under 25 miles of electric-only driving as well as 83.1mpg combined.

Emissions are impressively low for a car of this size, too, at 82g/km. It does mean that when fully charged this car is noticeably cleaner to run than many of its non-hybrid competitors.

Thankfully the switch to a hybrid powertrain has left the Bentayga’s excellent refinement unaltered.

It’s still a beautifully quiet and sumptuous car to drive, with well-isolated road and wind noise combined with that silent EV running to create a genuinely relaxing cabin.

When called upon, however, during hard acceleration or higher speeds, the V6 engine does interrupt the peace somewhat.

It’s a slightly alien noise when it does present itself, mind you, clashing with the traditional V8 or W12 soundtrack that you’d usually get from a Bentley.

It feels its weight, mind you, but then the Bentayga Hybrid isn’t here to set lap records.

But the power that is available does feel nearly up to what you’d expect from a Bentley, even if it can’t quite offer the bottomless wells of power that you’d find in both V8 and W12 Bentayga models. 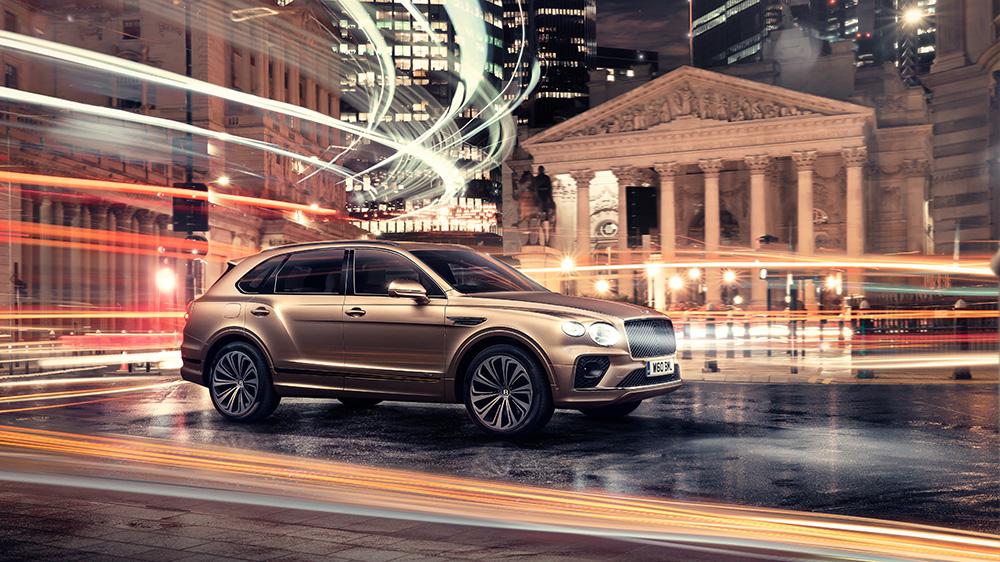 Big and in your face, the Bentayga’s styling is still getting people talking just as much as it did when it first arrived. The refreshed version has definitely refined the styling, mind you, with the rear end of the car now a little better executed than before.

There’s no mistaking it for a car from another brand. However, with Bentley’s tell-tale styling tweaks like the twin headlight design all present and correct.

There’s not a lot to distinguish this hybrid version from the rest of the range, too. Some subtle badges are dotted here and there, while there’s an extra flap at the rear for the charging port.

Many people will appreciate that this car doesn’t scream about its electrified underpinnings, however.

High standards, inside and out

The Bentayga Hybrid’s interior is, like all other Bentleys on sale at the moment, built to an excellent standard.

There are a few touches that give away the car’s Volkswagen Group backing – such as the steering wheel buttons and indicator stalks – but these do fade into the background against the wide variety of high-end materials and classic features.

The front seats are also comfortable and supportive, while there’s plenty of space for those sitting in the back too.

The only real issue is that there’s no dedicated space for the charging cables, so they have to take up space in the boot.

Thankfully, there’s no real penalty in terms of overall luggage space between the regular Bentayga and this hybrid, which deliver 484 and 479 litres respectively.

Tech takes a step up

It’s the technology that has taken a real step up in this latest generation Bentayga and it’s an aspect that has completely transformed the experience.

You now get a 10.9-inch central infotainment screen that is head-and-shoulders above the one you’d find in the older car, both in terms of usability and features.

It also incorporates Apple CarPlay and Android Auto; we tried the former and it worked seamlessly.

There are also a vast number of safety assistance systems on board, including traffic sign recognition and park assist.

The Bentayga also features Night Vision; a bit of a gimmick? Perhaps. But you can’t help but be impressed by the function when it’s switched on.

The Bentayga Hybrid feels like a good sign of things to come. It’s just as refined as you’d expect a Bentley to be, but that addition of a hybrid powertrain does transform the experience and, at lower speeds at least, makes it even more refined than the standard car thanks to near-silent driving.

As Bentley’s plans progress we’d like the Bentayga Hybrid to be given a longer electric-only range and a little extra punch, but for those after a high-end way of getting about while reducing emissions, it’ll prove mighty appealing.

Rolling in style: A spin in the timeless Ghost