With hydrogen coursing through its engine, the H2 Corolla is back for another year of the Super Taikyu race series.

The car put on another solid performance over the weekend of March 19-20, completing the 5-hour race at Suzuka Circuit in Suzuka City, Mie Prefecture.

With finished races already becoming a familiar sight, efforts to increase options for achieving carbon neutrality are set to go into higher gear this season.

Until the final round in Okayama last November, the ST-Q class for manufacturer development vehicles had featured only the hydrogen-powered Corolla and one other ROOKIE Racing car.

With the entry of Mazda in that final race and Subaru this year, the field has grown to five competitors.

Among them, the addition of Subaru's BRZ and ROOKIE Racing's GR86, which race on fuels made by synthesizing components such as hydrogen and carbon dioxide (CO2), marks greater technical progress and increased commitment toward carbon neutrality.

Our report on this season's opening round will focus on the three aspects of producing, transporting, and using energy.

Competing in their first race, both the Subaru BRZ and GR86 ran on synthetic fuels, which their engines burn just like gasoline.

Although the cars emit CO2 while running, these emissions are offset in fuel production, which involves capturing CO2 from the atmosphere. These are known as carbon-neutral fuels, a class which also includes the biofuel used by the Mazda Demio since last year's final race.

The appeal of these fuels is that they make it possible to continue using long-established engine technology, so that even cars already on the market could contribute to carbon neutrality.

Subaru's BRZ is equipped with the production model's 2.4L horizontally opposed engine, while the GR86 sports a 1.4L turbocharged engine based on that of the GR Yaris.

Despite these different engines, both cars use fuels from a European manufacturer that also supplies synthetic fuels for the WRC.

Such fuels remain a future technology still not widely adopted, with many watching to see how far they can go in racing. However, according to Teru Ogawa, Project General Manager of GR Powertrain Development Div., who is in charge of developing carbon-neutral fuel engines, "The engine hardware hasn't changed at all-it's just like a regular gasoline engine. Similarly, for control aspects such as ignition and injection timing, we've made changes within the scope of conventional engines."

Drivers have also commented that "it drives more like a gasoline car than expected-behind the wheel, you can't tell the difference."

Indeed, with both the Subaru BRZ and GR86 not facing serious problems during the race, the fuels already seem to have proven themselves in practice.

The key issue, then, is price.

"The current fuel is still a work in progress," says Ogawa. "We are figuring out how to make it cheaper and use existing technology and production facilities with minimal changes. We'll work with fuel manufacturers to develop low-cost products and setups that make use of existing engines as much as possible."

Moving forward, carmakers and fuel producers must work together to establish prices and standards for the industry as a whole.

Last season, over the six months following its race debut, the hydrogen-powered Corolla boosted engine power by 24% and torque by 33%, competing with gasoline cars in terms of performance.

Since then, the main area of progress leading up to this race has been fuel efficiency. Here, the team has managed a 20% improvement without sacrificing power or torque, which are generally seen as the trade-offs for greater efficiency.

GR Vehicle Development Division General Manager Tomoya Takahashi illustrates the progress: "Whereas last year at Suzuka we did eight laps on a full tank, now we can run ten."

The key lies in being able to use up more of the gaseous fuel. Just like a spray can, as fuel volume runs low, injection pressure also drops, making it difficult to use up completely.

For this race, the team has been able to increase driving range by improving combustion when the hydrogen tank's residual pressure has dropped, affecting fuel supply to the engine.

Advances have also been made in refueling. Alongside larger nozzle and fuel port diameters, refueling pressure has improved from 40MPa to 60MPa.

The refueling time had been shortened to 1 minute and 50 seconds by the end of last year. With higher flow rates, the team has shaved off a further 20 seconds, down to one and a half minutes.

At this race, Toyota also announced news of planned efforts to use liquid hydrogen.

The main advantage offered by liquid hydrogen is range. Liquefying compressed hydrogen gas increases its energy density (amount of energy per unit volume) by a factor of around 1.7, which translates directly into longer driving distances. 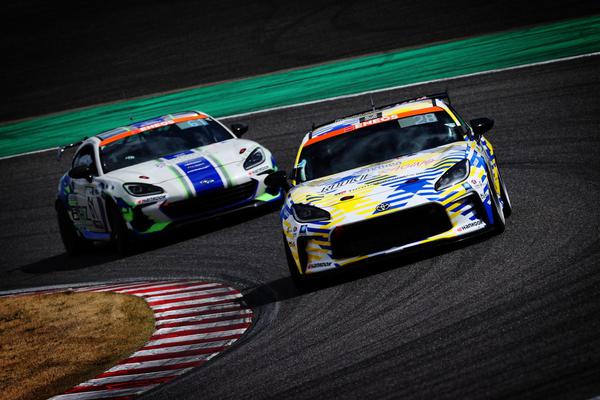 And the benefits don't end there. Whereas gaseous hydrogen is currently pressurized to 70MPa, in liquid form it can be used at close to normal pressure.

This would eliminate the need for round tanks that evenly distribute pressure, improving the car's fuel storage efficiency.

Currently, the hydrogen-powered Corolla's rear seats are loaded with four cylindrical fuel tanks. If these become smaller and are no longer restricted in shape, the rear seats can be freed up, improving convenience for the user.

On the other hand, temperature control becomes an issue, as the hydrogen must be kept below its vaporization point of -253℃ to remain liquefied.

Moreover, since driving with liquid hydrogen fuel is a new endeavor not covered by existing rules, alongside the technical aspects, the team will also need to consult authorities on legislation.

"We can't use liquefied hydrogen without having all the pieces in place-the car, infrastructure, and legislation," says General Manager Takahashi about the future prospects. "I hope we can get all three ready at some point this season."

As part of the challenge of transporting hydrogen, Toyota Transportation biofuel trucks and Commercial Japan Partnership Technologies (CJPT) light-duty fuel cell (FC) trucks were once again mobilized for this race.

Of particular note was that these light trucks, a staple of everyday logistics, were able to quadruple the amount of hydrogen carried at one time.

This feat was made possible by switching from metal tanks to ones with resin liners.

With a maximum capacity of 3 metric tons, the light trucks were only able to carry one 1.7-metric ton metal bundle at a time, amounting to just 15kg of hydrogen.

On top of that, the FC truck needed 7kg of hydrogen fuel to make the 200km return journey between Suzuka Circuit and Toyota City in Aichi Prefecture, inefficiently using up much of the 15kg of hydrogen being transported.

This time around, Toyota developed a rack that bundles the resin tanks used in the Mirai fuel cell vehicle, after coordinating with the relevant bodies to ensure safety. With this arrangement, the team was able to increase pressure from 20MPa to 45MPa, allowing more hydrogen to be stored.

The switch to resin also reduced the weight of each bundle to 1,350kg and made them more compact. Two bundles could now be carried in one truck, increasing the hydrogen load to 56kg.

The Mirai runs on an even higher hydrogen tank pressure of 70MPa. Raising the pressure of the rack-bound tanks to this level would increase the load to 83kg of hydrogen.

CJPT President Hiroki Nakajima expressed his hopes for this project, saying, "Although we're working under restricted conditions, conducting these trials allows us to gather data. We want to determine how safe this is and identify where the issues lie to work with the relevant bodies to make transporting hydrogen at 70MPa possible."

This race has also seen Yamanashi Prefecture join as a new partner on the hydrogen producing side.

Teaming up with companies including Tokyo Electric Power Company Holdings and Toray, the prefecture has been trialing hydrogen production using electricity from the Komekurayama Solar Power Plant in Kofu City since June 2021.

With a production capacity of 370Nm3/h, the plant provides a stable supply to the power grid. Any surplus electricity during good weather is used to produce green hydrogen, which is distributed both inside and outside the prefecture.

Seeking to expand this approach of developing hydrogen from solar power, the prefecture and the two corporate partners above established the Yamanashi Hydrogen Company in February this year. The company is eagerly working to promote its system in Japan and beyond.

Attending the Super Taikyu press conference, Yamanashi Governor Kotaro Nagasaki expressed his enthusiasm, saying, "We hope to bring our devices and systems for producing green hydrogen from solar power and other renewable energy sources to the rest of Japan and the world."

Purposeful passion and action-the phrase has become synonymous with the Super Taikyu challenge. At the press conference on qualifying day, President Akio Toyoda once more returned to these words.

I believe that achieving carbon neutrality will take the collective effort of all people and all industries. Setting goals and regulations won't yield immediate results. It is purposeful passion and action that will shape the future.

Judging by the race alone, that circle of collective effort is certainly expanding. The number of corporate and government logos on the press conference backdrop had grown from the initial eight to 22 at Suzuka.

These initiatives have also spurred changes within Mazda and Subaru, which both compete in the same class.

A few weeks ago, our engineers told me they want to develop a 2.2L 300hp diesel engine for the second half of the season, after seeing the formidable Subaru BRZ and GR86 firsthand.

Listening to their appeal, I agreed to take on this greater challenge. We're going to put up a real fight in the second half of this year's series.

For us, the main motives are promoting carbon-neutral fuels, building fans, and nurturing our engineers.

Right now, we have more than 100 employees engaged in development and testing, driven by purposeful passion and action.

They have worked hard to develop the race car alongside their regular duties in the very short time since last November when we announced our intention to compete.

Many of the engineers involved are young employees in just their third or fourth year at Subaru. They've managed to come this far through trial and error, working across company divisions as a unified team.

I hope this experience inspires many of our employees and helps them grow as individuals.

Purposeful passion and action spreads, firing up the hearts of engineers at different companies and sparking new areas of competition.

Making better, faster cars to take on a rival is the true thrill of motorsports.

The goal is to use this fierce competition unfolding before the eyes of motorsports fans to create a carbon-neutral society. In 2022, the challenge of increasing options and like-minded partners continues to gain speed.