KOCHI: Motor, batteries, and automated machines always fascinated young Zidan Shanas. He started giving his toys a facelift when merely playing with them wasn’t enough. Gradually, he started transforming toys using newer technologies. The 14-year-old has now created a robot named Raspy. Doing extensive research for about a year Zidan built the robot, which is tall as him.

“My mother got me a solar-run toy when I was nine. After I got bored with it, I broke it down. Using its batteries and motors, I made a car on my own,” recalls Zidan. From making cars to other remote control devices, Zidan’s ambitions have grown with him.

Inspired by ‘Atlas’ a robot built by the Boston Dynamic company, Zidan decided to build one focusing more on the software. “I used to make battery or motor ridden devices. So, I wanted to utilise my programming knowledge for Raspy. For physical movement, I used C programming and an advanced form of Python,” says the Adoor native. 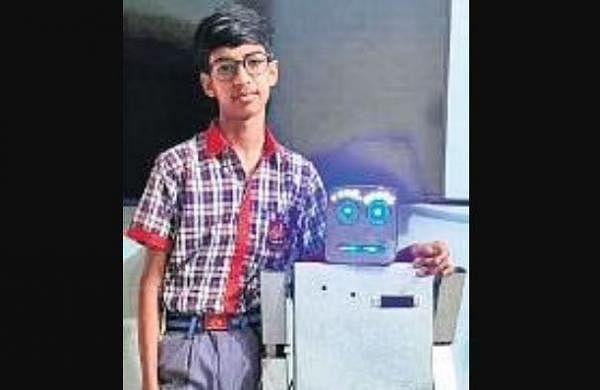 A mini-computer, Raspberry Pie Model B+, gives power to the head, shoulders and the servo motors of the arms. All one needs is an open-source mobile application, called Arduino Bluetooth, to control the robot. “If we type F on the app, the robot will move forward. It would go backwards by typing B,” says Zidan, a class IX student of Kendra Vidyalaya in Adoor.The robot’s legs have four 12W Dc motors.

According to Zidan, Raspy can have normal conversations, answer general knowledge questions and even give descriptive answers when asked. “If you add ‘what is’ or ‘search for’ before the question, it gives descriptive results,” he adds.

Raspy moves according to voice command. It plays music and shows current affairs or any updates from Zidan’s desktop with a single command. “Raspy can use the internet in the background and in seconds, it can respond to any query,” he says.

Raspy can move at two to three km per hour speed for two hours straight. Zidan wishes to make the robot fully voice-controlled instead of relying on Bluetooth. “When it loses its balance, I want the wheels to support the entire weight, preventing it from falling down,” he says.

“Robots can make our future simpler, but not in a way that would keep humans out of jobs. Robots can be used in situations which are dangerous for us,” concludes Zidan.