The crossover SUV segment has absolutely exploded in recent years, seeing a dramatic uptick in the mid-aughts that’s culminated in crossovers largely displacing sedans and now out-selling full-size SUVs and minivans combined, with roughly one in every three cars in America sold being of the crossover variety. The immense popularity of the genre has unsurprisingly prompted just about every major automotive marque to roll out their own crossover model — or models.

While this gives us more options to choose from than ever before, it can also make it difficult to sort through the dozens and dozens of available crossovers that currently constitute the market. So, with this in mind, we’ve pored over the more than 100 different models currently in production in order to deliver this hand-picked list of the best crossover SUVs that you can buy off the lot right now.

The Benefits Of A Crossover SUV

Often built atop regular car platforms rather than the chassis of an SUV, crossover models offer numerous benefits and advantages over their larger full-size counterparts. Typically bestowed with a shorter wheelbase, lower center of gravity, and shorter ride height, crossovers boast sportier performance with better, more nimble handling and faster acceleration while still affording cargo volume and spacious seating that’s on par with a regular SUV.

Not only are crossovers usually cheaper to purchase than full-size SUVs, but they consequently have more affordable insurance, and they almost always get better mileage — another benefit of their more diminutive scale. The smaller dimensions also make them easier to navigate — especially in congested urban areas — as well as to park. Overall, crossovers afford many of the traits and characteristics that have made regular SUV models so popular, while coming in packages that are more affordable and more practical, but no less utilitarian.

The Areas To Take Into Account When Shopping For A Crossover

As one of the newer automotive segments, it can be a little tricky to know what to look for when shopping for a new crossover. To help simplify the situation, we’ve pieced together this guide on the five most crucial areas to factor in when buying a new or late model crossover.

Amenities:Anytime you’re buying a new car, it’s always worth checking on the amenities available for each model — and whether said amenities come standard or are optional upgrades. This not only includes in-cabin creature comforts like heating and cooled seats, infotainment displays and sound systems, and smartphone and app connectivity, but also smart tech and electronic assists such as self-parking, lane-keep assist, active cruise control, and so on.

Appearance:Not unlike they do with pickup trucks, the North American market has a major proclivity for the masculine and commanding aesthetic of SUVs — which is undoubtedly a major selling point for a great many crossover models. With such an abundant and diverse market, crossovers now come in a wide variety of shapes and styles, with some boasting a boxier look that mimics the appearance of traditional full-size SUVs while others take a sleeker, more streamlined approach in their design. So, while it shouldn’t be the guiding factor in your search, there’s nothing wrong with letting your aesthetic tastes play a role in your decision.

Cargo & Seating:One of the biggest selling points of crossovers is their abundant cargo space, which makes this a pivotal area to review when shopping. Not only will you want to check out a model’s overall cargo space — a metric typically denoted in cubic feet — but also if its seats can fold down or be removed. Crossovers also tend to have fairly roomy seating, making it important to look into the number of seats, along with accompanying info on areas like head and legroom.

Powertrain:As the heart of a crossover, the powertrain is of extreme importance. As such, when shopping it is essential to look into the engine’s size, configuration, induction system, and power figures. And, as somewhat performance-focused vehicles, a good number of modern crossovers are offered with base model engine options, as well as higher-specced mills and trim levels.

Performance:With performance being a key selling point, a lot of manufacturers tend to lean into this angle by equipping their respective crossovers with sport-tuned suspension, high-end brakes, and advanced chassis designs. Alongside the engine, all of these elements will play an important role in a crossover’s handling and overall performance — as will its curb weight, wheelbase, ride height, and horsepower and torque figures. Also, for a more objective sense of performance — at least in terms of raw acceleration and speed — it always helps to review a vehicle’s top speed and 0-60mph time.

Specifically designed for life in the city, the base model of Volvo’s XC40 — the T4 FWD Momentum — is a sleek and compact crossover SUV that’s kicked along by a surprisingly peppy turbocharged inline-four engine that sends power to all four wheels. The Scandinavian-designed crossover also gets a 12” instrument panel, a 360-degree camera parking system, 18″ 5-spoke alloy wheels, and a clever smart storage solution system made to accommodate specific items such as water bottles, gym bags, grocery bags, and laptops.

The Audi Q3 is a luxurious yet practical crossover that makes for an exceptional daily driver, with a generous 48 cubic feet of storage space, a 228-hp 45 TFSI engine that allows for a 7-second 0-60mph time, and a perfect five-star NHTSA Safety Rating. In addition to coming loaded with a suite of smart driver-assist functions, the Q3 also boasts a plush interior that comes standard with Audi’s new MMI touch display. 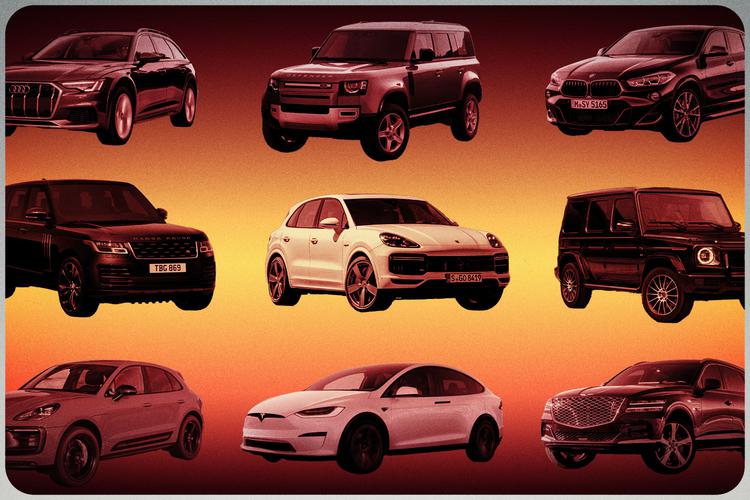 Taking ample aesthetic inspiration from the models in Lexus’ sporty “Flagship” line, the new NX 250 AWD is a practical commuter car and grocery-getter that’s still capable of a spirited behind-the-wheel experience in the corners. Powered by a 203-hp inline-four, the NX 250 AWD features a class-leading safety system and an incredibly high-tech interior that’s offered with an ultra-premium optional surround sound system from renowned American audio brand Mark Levinson. On top of a high-performance F Sport Handling-spec, this model is also offered in hybrid and plug-in electric hybrid variants.

A fully-electric crossover inspired by the legendary Ford Mustang pony car, the Mustang Mach-E is a shockingly capable EV, even in its lowest-spec form (the Select), thanks to a 5.2-second 0-60mph time and a 247-mile range. Alongside an enormous central touchscreen display, the base model Mustang Mach-E also gets the Blue Oval’s eAWD system and the second generation of Ford’s advanced Co-Pilot360 system. And, while it’s significantly pricier at just under $65,000, Ford also makes a GT Performance Edition of the Mustang Mache-E that’s one of the fastest SUVs in the world, with a 3.5-second 0-60mph time.

A sleeker and sportier take on Land Rover’s classic design language, the Range Rover Evoque S is a tremendously modern and luxurious crossover that comes loaded with tech, bells and whistles, and creature comforts. At the heart of the S-spec Evoque is a turbocharged 246-hp inline-four that allows the sub-4,000lb crossover to reach 60mph from a standstill in just over 7 seconds. And, with 8.9” of ground clearance, the second generation of Intelligent Terrain Response, and All-Terrain Progress Control, the compact luxury SUV actually boasts some pretty decent off-roading capabilities right off the showroom floor.

While most crossovers place a premium on performance, the Mercedes-AMG GLC 43 focuses exclusively on it. Good for 385hp and 384ft-lbs of torque, its bi-turbo 3.0-liter V6 engine is mated to a paddle-shifted AMG SPEEDSHIFT TCT nine-speed transmission that’s paired with an AMG Performance 4MATIC AWD system — a setup that allows for a 155-mph top speed and a 4.7-second 0-60mph time. In typical AMG fashion, the GLC 43 also gets a luxurious carbon fiber-laden interior and a slew of AMG-specific hardware such as AMG-spec four-piston calipers, an AMG Performance Exhaust, and AIR BODY CONTROL-equipped AMG Sport Suspension, just to name a few.

The newest model on this list, the Maserati Grecale is a premium crossover that features the exotic Italian carmaker’s signature brand of luxury and performance, with its most top-shelf variant offering a 3.6-second 0-60mph time and 177-mph top speed — giving it best-in-class top speed and acceleration, on top of already also sporting best-in-class interior cargo room, driveability, and handling. This model also comes brimming with modern tech including the Maserati Intelligent Assistant Multimedia system. What’s more, Maserati will be producing higher-specced Modena and Trofeo variants of the Grecale, along with a fully-electric Folgore-spec of the crossover sometime in 2023.

Despite being a 2.2-ton crossover, Porsche’s GTS-spec Macan boasts performance capabilities that can put most modern sports cars to shame, with a twin-turbo 2.9-liter V6 that puts down more than 500hp and allows for 4.3-second 0-60mph runs (or 4.1 seconds with the Sport Chrono package) and a top speed of nearly 170mph. Even with its impressive performance prowess, this top-of-the-range version of the Macan — which is currently Porsche’s best-selling model — also features an advanced suite of tech and a thoroughly plush cabin that packs up to 53 cubic feet of storage space.

Loaded with features that have trickled down from Alfa Romeo’s high-performance sports models, the Stelvio Quadrifoglio AWD is one of the larger models on this list, though it still falls squarely into crossover territory. Capable of 3.6-second 0-60mph times, this top-of-the-line variant comes standard with a 505-hp 2.9-liter twin-turbo V6, a carbon fiber hood and driveshaft, active suspension, an advanced array of smart driver assists, and the Italian automaker’s Quadrifoglio clover badging. The cockpit also gets a subwoofer-equipped 14-speaker Harman Kardon audio system, an Alfa DNA Pro Drive mode selector, a QV race-inspired carbon fiber steering wheel with aluminum paddle shifters, and optional Sparco Racing seats.

One of the fastest-accelerating models on this list, BMW’s X6 M is an ultra-high-end Sports Activity Coupe with some truly remarkable performance abilities. Powered by an insanely potent bi-turbo 4.4-liter V8, the X6 M generates 553ft-lbs of torque and an even 600hp, enabling the supercar-esque crossover to clock a 3.8-second 0-60mph time and a top speed of 155mph (or 177mph with the optional M Driver’s package). Other elements unique to this true M-spec model include M Wheels, M suspension, M-spec brakes, and a carbon-loaded cabin with an M steering wheel and HUD. And, while it already boasts tremendous performance capabilities in its stock form, BMW also offers an optional Competition Package for the X6 M that adds a host of special accents and features, including a horsepower-bolstering M Sport exhaust system.

Want to check out an additional array of sporty vehicles with comfortable seating and generous amounts of cargo space? Then be sure to cruise over to our guide to the best road trip cars for a list of over a dozen of the finest crossovers, coupes, and sport wagons currently in production.