In late March, Kia announced that a production version of the EV9 large electric SUV concept would launch in Europe sometime in 2023.

Now, the EV9 has been confirmed for North America as well. At the New York International Auto Show, Kia said the EV9 production model would arrive in the United States in the second half of 2023.

We contacted Kia America for more details, but a spokesperson told us the company cannot comment further at this time.

Previewed by the Kia Concept EV9 that debuted at the LA Auto Show in November 2021, the production electric SUV will be built on Hyundai Motor Group's E-GMP dedicated EV platform, which is also used by the Kia EV6, Hyundai Ioniq 5, and Genesis GV60. 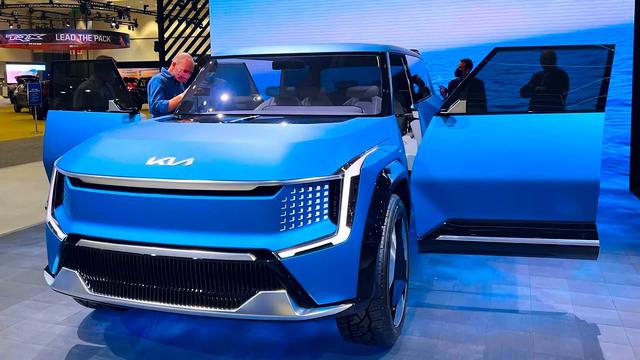 Since it will be underpinned by E-GMP, the Kia EV9 production SUV will benefit from the 800V architecture enabling ultra-fast DC fast charging at up to 350 kW.

When it unveiled the Concept EV9, Kia said the battery can charge from 10% to 80% in 20-30 minutes. The automaker also mentioned a driving range of 300 miles (483 km). The battery pack's capacity was not disclosed, but it is likely larger than the EV6's 73-kWh pack since it has to move around a heavier, boxier vehicle.

About the latter part, expect much of the EV9 study's styling to make it to production, except concept vehicle stuff like the rear-hinged rear doors, lack of B-pillars, and airplane-style yoke. The side rearview cameras may not be kept on the production model either.

As for the three-row interior, it will probably be not that minimalist. The massive 26-inch digital screen could make it to production, although it will probably be replaced by two separate screens, one for the gauge cluster and the other for the infotainment system.