Indi EV was founded in 2017 and has been developing the One – which is sized between a Tesla Model Y and Tesla Model X – for more than three years. Prototypes are being tested ahead of a planned start to production in mid-2023, with crash testing currently under way. Indi EV will build the car in the US, with several sites reportedly under consideration. 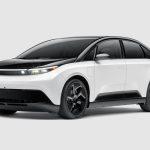 It will be sold initially in North America but most of the One’s systems have been designed for global homologation, according to head of design Andre Hudson. It’s intended that the car will reach European and Asian markets at a later date.

Key to the premium model is a high-powered Windows computer known as the vehicle integrated computer (VIC), which is clearly visible through a panel in the bonnet. It’s central to the One’s positioning as a ‘digital toolbox’. As Hudson puts it: “We believe that the future of EV technology is going to be measured more in processing power than horsepower.”

The car’s VIC, 5G connectivity, microphones and cameras (three inboard-facing, two outboard) enable it to function as a mobile workspace; as a hub for capturing, editing and uploading content; or as a platform for video games that employ AR or VR. In the last case, the gameplay can move in sync with the movement of the vehicle, which is said to eliminate the nausea sometimes associated with VR. Indi is developing its own games for passengers to play as well as opening the system up to third-party developers.