MENU
Home > Suv > How Did Norway Become The EV Capital Of The World?

This article comes to us courtesy of EVANNEX, which makes and sells aftermarket Tesla accessories. The opinions expressed therein are not necessarily our own at InsideEVs, nor have we been paid by EVANNEX to publish these articles. We find the company's perspective as an aftermarket supplier of Tesla accessories interesting and are happy to share its content free of charge. Enjoy!

We all know Norway is the most charged country on the planet—in September, electric vehicles accounted for 78% of the total auto market. Adding hybrids and plug-in hybrids brought the total share for electrified vehicles to 92%. The most popular models were Tesla’s Model Y and Model 3, which accounted for 40 percent of total sales.

Above: In the world's leading electric vehicle market, Norway, the Tesla Model 3 and Model Y lead the way (Source: Tesla)

How did the Nordic nation get to this point, and are there some lessons here for other countries that would like to break their oil addiction? Ironically, the best account of Norway’s rise to EV stardom that we’ve seen lately was written on the other side of the globe.

As Bevan Shields writes in the Sydney Morning Herald, the story began in the 1980s, with a couple of environmentalists who drove the Norwegian roads in a converted Fiat Panda. They felt that EVs should be exempt from tolls, so they regularly tooled through toll booths without paying. This led to the car being impounded and put up for auction, but nobody else wanted their homemade EV, which had a range of only 45 kilometers, so they were able to buy it back for a mere 200 Norwegian kroner.

This act of green civil disobedience generated a lot of publicity, and activists pressured the government to establish incentives to drive electric. Norway made EV drivers exempt from tolls in 1997, granted free parking in 1999, and began allowing EVs to use bus lanes in 2003.

What really got the electric ball rolling was a series of tax reductions. Like many European countries, Norway imposes various taxes—import tax, registration fee, company car tax—on automobiles, and EVs are exempt from most of these. The country’s value-added tax can be up to 25 percent for a gas-burner, but for an EV, it’s zero. This means that even a luxury EV such as a Tesla can be cheaper than a mid-price legacy vehicle. (Now that EVs have become so prevalent, there’s been talk of rolling some of these goodies back.) 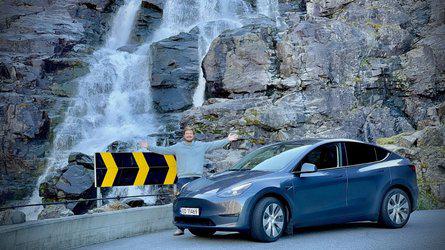 Above: The inside story on Norway's electric vehicle growth in the country and the future ahead (YouTube: Bloomberg Quicktake: Now)

Norway’s Northern European neighbors are also EV leaders. In the number-two spot is Iceland, where electrified models accounted for just over half of vehicle sales last year. Number three is Sweden, with 32 percent, followed by the Netherlands (25 percent) and Finland (18 percent). In the US, sales of pure EVs were a paltry 1.7 percent in 2020. The Morning Herald’s Bevan Shields laments that Australia lags far behind the global pack with a pitiful one percent.

What can governments do to boost their countries’ rates of EV adoption? Norway’s Climate and Environment Minister Sveinung Rotevatn told the Morning Herald that it’s all about the convergence of better vehicle performance and lower prices. “Money talks, and I don’t think you can reasonably expect people to sacrifice their family’s economy to save the environment. People do want to make an effort for the environment but your wallet matters and most aren’t willing to spend 10,000, 20,000 or 30,000 euros extra on buying a car—that’s the simple truth.”

“If an environmentalist tells me they’ve just bought an electric car, I’m not impressed by that," says Rotevatn. "But when people—some who don’t even believe in climate change—buy electric, that’s when I pop the champagne corks. And that’s the only way you’re ever going to stop global warming: to make it profitable for consumers.”

Check Out These Related Articles:

By: EVANNEX++++ Got a tip for us? Email:tips@insideevs.com