Let it not be said that we at CarsGuide don't go above and beyond to answer the hard questions nobody else is brave (or stupid) enough to tackle.

Need an example? What happens if the car you're driving has keyless entry and push-button start, but once you've got the engine running, you remove the key from the car?

Will it drive 500m or so and then stop? Will it somehow alert you that the key is missing? Or will it simply refuse to move away from the key at all?

As it turns out, the answers to those questions are, sadly, no, no and definitely not.

The Ultra is priced at $38,990 drive-away. (image credit: Andrew Chesterton)

I know because my Haval H6 Ultra has the aforementioned push-button start (part of a heap of cool tech features this SUV arrives with), and I accidentally, and unwittingly performed this exact experiment.

My wife and I were heading out on an errand, and she had the key in her bag. But once I'd loaded up the destination and she saw it was about a 30-minute drive away, she promptly bailed on me, taking her bag with her.

Cut to me driving off, the engine happily running, and me blissfully aware that anything was amiss. And that's how I stayed, until completed my cross-city mission, killed the engine, and went to lock the car.

No key. The car wouldn't restart. And the only solution was to send a very expensive - and a little confused - Uber to collect said key and deliver it to me.

Now, is any of that Haval's fault? Nope. You can't idiot-proof everything, and, as it turns out, I'm a special kind of idiot. Still, it's handy to know, right?

Still, it was a mere speed bump in an otherwise fairly happy month with the H6 Ultra, which is a seriously value-packed SUV considering its sub-$40k drive-away price point.

Our Ultra sits second from the top in the H6 family, above the Premium and Lux variants but below the Vanta. It's yours for $38,990 drive-away, which - given the standard kit - presents pretty good value in this segment. 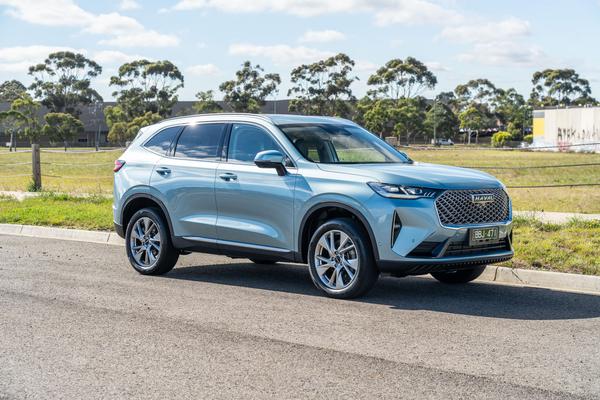 As is often the case with Haval products, you really don't want for much in the way of standard features here. While all H6 models get 18-inch alloys (save the Vanta, which gets 19-inch wheels), LED headlights, tail lights, DRLs and rear fog lamps, and Apple CarPlay, springing for the Lux adds things like front LED fog lights, a leather steering wheel, roof rails, dual-zone climate, faux-leather seats that are heated in the front and adaptive cruise.

Our model, the Ultra, ups the equipment game further still, adding a big sunroof, an electronic boot, a bigger 12.3-inch touchscreen and a head-up display, heating and ventilation for the front seats and wireless charging for your mobile phone.

That's plenty of kit, and given the H6 Vanta really only adds the bigger alloys and some blacked-out style bits (but also only costs $1000 more), either of the top-tier models will deliver everything you really need or want.

And that's probably the thing I've enjoyed most about this Haval over our first month of ownership – it looks and feels like a nice place to spend time.

The interior especially is nicely done here. The materials all feel nice under touch, there's a nice and premium-feeling blend of colours, patterns and materials, and a kind of angle, sharp-edged design to the dash layout that really works here.

All H6 models share the same lightly underwhelming engine, though – a 2.0 litre turbo-petrol engine that produces 150kW and 320Nm. It pairs with a seven-speed dual-clutch automatic and powers the front wheels.

It's not a big engine, and while it feels far more dynamically sorted than the smaller Haval Jolion, our H6 still has the irksome habit of delivering all of its power in one fat lump, causing much front-tyre wheel spin when you're too heavy with the throttle. It's more embarrassing than anything else, as heads tend to whip around as though some hoon is cutting labs of suburbia every time those front tyres light up.

There's also a ragged edge to the rear suspension, which is interesting because it soaks up minor imperfections with little to no stress. But when you hit a bigger, sharper bump, there can be audible thump from the rear axle, like the suspension is knocking against its limit.

Still, it's big (think 600L seats up, 1485L seats down), comfortable and loaded with kit, and that was enough to keep me smiling over our first month together.