MENU
Home > Suv > come y with me Tesla's SUV crossover is not just about the gimmicks and gadgets...it's actually an utterly brilliant car

This is my third Tesla in three years so I should, by my right, not get excited by the gadgets, tech and gimmicks. But it is impossible.

There is no brand like it in the claustrophobic motor industry. Yes, there are cars that are better looking, there are others that have longer ranges, there are those that are cheaper and even some cars have quirky USPs that even Elon Musk hasn't thought of yet.

But none of them combine everything in one package and wrap it up in a bow offering buyers the most exciting car on Irish roads like Tesla does.

Even if you were to strip away all of the gimmickry like farting indicators, Christmas music, installed games, the impressive karaoke catalogue, the absurdly large panoramic roof, the various hilarious horn sounds and all of the apps like Netflix, YouTube and Spotify that are fully operational, the thing is you are still left with an utterly brilliant car.

All of the above get the headlines and are the big talking points throughout your driving experience, especially when you have two car-mad daughters who adore the brand. But only the lucky few who get to sit in the driver's seat will fully understand how good a car these Teslas really are. It is something that gets lost in the hazy narrative of wacky gadgets and the company owner's bonkers social media feed.

The Y is the company's 'crossover SUV' meaning you are afforded more space than the S and the 3. And it is very noticeable when you sit into it. Head room and leg room is plentiful and warmly received by anyone who sits into any of the seats.

This time around my test car had the black interior which was a welcome addition compared to last November's Model 3 that had the whitest of white leather, leading to every single speck of dirt being spotted immediately.

The comfort and finish was the exact same but without the guilt, so maybe opt for black when you are buying your new Tesla.

Like the others, this Y has no buttons, knobs, dials or toggles to hold on to. Just a gorgeous big steering wheel and an even bigger user-friendly touch screen. That's it. The screen itself is a whopping 15 inches (for context the biggest iPad you can buy is 12.9") and houses every feature and service and safety precaution and gimmick you could ever want. 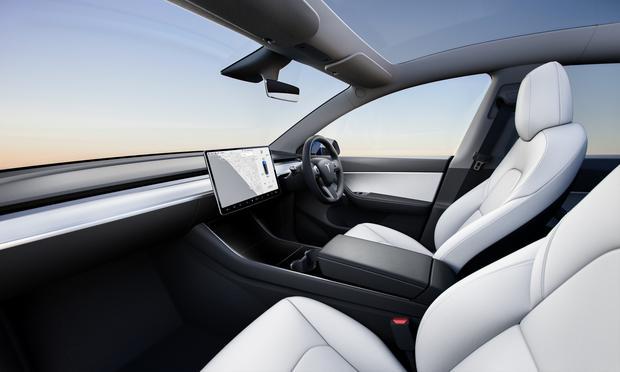 As is now the norm, when I was handed the key (a credit-card-sized key that lives in your wallet) I was told by the Tesla team to "give it a few days" to get used to the controls, and I fully understand why they said that. Little things like the windscreen wipers require two touches of the screen instead of the usual flick of a lever behind the steering wheel. Access to the radio requires two touches too; as do most controls. But as the days and driving miles increased during my week, the more normal it became.

By day five muscle memory was kicking in and each required control was simply swiped or pressed into operation. It actually is a work of art inside the infotainment centre. And once you get used to it, it becomes extremely user friendly too.

The tech and the comfort aren't my favourite thing about this, though. As someone who jumps in and out of a new car every week and who is testing more and more electric vehicles as they come onto the market, can I just shout from the rooftops how refreshing it is to have a car that a) offers a huge range (533km) and b) hasn't exaggerated the number. 533km is the real range. Only when I floored it on the motorway did it stray slightly under but in real km on real roads the range dial is absolutely accurate. And in a world of contrived claims in nearly every car I've driven recently it is a breath of fresh air to have a car that drops 13km range after, wait for it, a 13km commute. Mind blowing.

You can buy one of these for €66,990 but the version I had was loaded with some pricey extras that resulted in a €83,564 price tag. The €2,300 multi coat paint isn't necessary and even though it is one of their proudest options, I would struggle to justify the Full Self Driving pack for €7,500. But I don't even like the idea of Cruise Control so I might be on my own on this one.

There is a 7-seater option too, which I've only seen on the web and looks like row three comes with decent space to the detriment of the boot space in my 5-seater version. Obviously.

The only thing that took a while to get my head around is the shape of the car. Far less slick than the 3 or the S, the bulbous design is very unique and certainly caught the attention of passers-by and (weirdly) other Tesla drivers. It did grow on me as the week progressed and I fully acknowledge that my issue with the looks isn't a widely shared concern.

This is so far ahead of so many of its competitors that it is an easy recommendation from me whenever someone asks about EVs.

Now download the free app for all the latest Sunday World News, Crime, Irish Showbiz and Sport. Available on Apple and Android devices