The Solar-Powered Aptera Aims to See the Light of Day

Chris Anthony, co-founder and co-CEO of Aptera, is sitting at a desk talking loudly over the sound of grinding metal coming from just beyond his office door. We are in Aptera’s San Diego headquarters, and it’s exactly the kind of frenzied atmosphere expected for a tech start-up circa 2021. A few yards from where we are sitting, rows of youthful engineers (most recruited from the aerospace sector) stare intently into computer screens. Others are fabricating bits using machinery that defies identification. Behind Anthony, a whiteboard running the length of the room is covered in mathematical equations that look like they would stymie Einstein.

“The mission is to create the most efficient product in history,” Anthony says, “not just automotive product, but any product. Usually, a company starts with a segment. Say, ‘We want to build the greatest sports car in history’ or the greatest anything. Nobody has ever tackled transportation strictly from the viewpoint of efficiency, above all else, from the ground up. So you do a hell of a lot of math.” You study fluid dynamics and shed any preconceptions about what an automobile should be. “You end up with something that looks very different from what people are used to,” he says.

This story originally appeared in Volume 8 of Road & Track.

At this moment, three Aptera prototypes sit inside the shop, two complete and a third on its way. The two completed vehicles are distinctly anthropomorphic, according to Sarah Hardwick, Aptera’s chief marketing officer. There’s Noir (painted black), who Hardwick says is sexy and badass. There’s the ivory-white Sol, whose personality is more about earth consciousness. Solis the one we will be cruising in this afternoon. It resembles an airplane more than a car. In fact, the company’s name means “wingless” in ancient Greek. The most frequently asked question from people who see the vehicle: Does it fly?

Aptera’s goal is ambitious, audacious, and awesome: a solar electric vehicle that requires no charging for most daily use but can be plugged in to reach a claimed 1000-mile range. Covered in mostly inconspicuous solar panels, it can deliver about 40 miles’ worth of sun-powered driving per day. Most drivers could get through a work week on free solar miles.

Skeptics are justifiably dubious, but Aptera has attracted an impressive fan base. Already, it claims more than 12,000 orders. Hardwick says Aptera is building not a company but “a movement.” The events about to unfold on this very afternoon will suggest she is right.

The quest to build a solar car dates to 1955, when an inventor working for General Motors created the Sunmobile. It worked nicely, but it was only 15 inches long. In 1980, Israeli engineers built one of the first full-scale solar cars. Then came the World Solar Challenge, a contest for solar-powered cars that resulted in some engineering triumphs but nothing resembling a production car. In recent years, major automakers have toyed with the idea, but none have succeeded.

Aptera didn’t start with any existing platform, the way traditional auto companies often would. From day one, the founders came at the problem with a clear mission and a passion for radicalism.

Co-founders and friends Steve Fambro and Chris Anthony began pursuing their dreams in 2005. Both had recently cashed out of other businesses. Anthony sold a boat company called Epic Boats and had also founded a lithium-battery company, while Fambro had been working with a biotech outfit called Illumina, making robots that made DNA materials for lab researchers. Neither had an automotive background; Anthony comes from finance, and Fambro from electrical engineering. The idea was to completely reimagine what a car could be.

Analyzing the fluid dynamics of an average car shape, they concluded that 60 percent of the energy is used just pushing air out of the way at highway speeds. So, a car shape that theoretically brought drag coefficient down to zero would instantly be that much more efficient. They developed a shape they believed would generate almost no resistance. They made a small model using Play-Doh and toothpicks, then sent it to a computer-aided design (CAD) specialist. The resulting CAD files were shipped to NASA.

“It cost us $17,000 for NASA to do this study,” Anthony recalls, “which was a little ridiculous because we had no company. It was just me and Steve, and we had to write that check.”

NASA ultimately verified the duo’s intel. Anthony and Fambro thought they had come up with an idea that would sell itself and could change the world. With his background in finance, Anthony raised capital. By 2008, they had a full-scale prototype, the Aptera Typ-1, a three-wheeler with a striking form that drew tremendous publicity. Popular Mechanics wrote: “The Aptera Typ-1 might look like something straight out of George Jetson’s garage, but it’s a real car. And it’s a real look at our possible future when it comes to emissions-free transportation.” The Aptera even got a cameo role in the 2009 Star Trek movie. 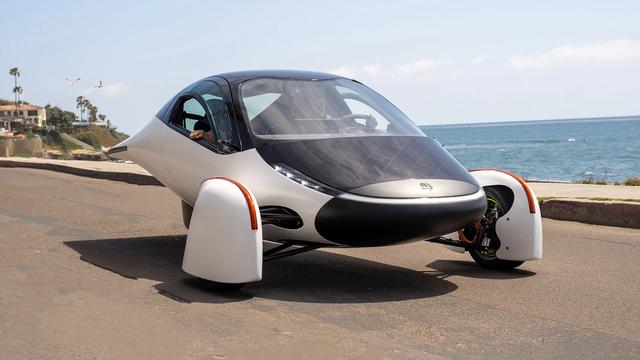 But now the company had to manufacture the thing. “We had a board of directors,” Anthony says,“and they wanted to get really aggressive with growth rates. They said, ‘You know who knows high-volume production? These Detroit guys.’”

Aptera was hiring young California-based engineers, and when the Detroit guys came in, it was oil and water. But the real problem was that in 2009, the world wasn’t ready for this kind of car. The battery technology wasn’t there. The solar technology didn’t exist. The wheels fell off this venture quickly, and it was liquidated in 2011.

Then something interesting happened. In 2019, Anthony and Fambro relaunched Aptera. “Because of the pace of battery and solar advances,” Anthony says, “now we are able to do so much more with the design than we were able to do a decade ago.” They hired a new staff, opened a new shop, and started building prototypes again. When Road & Track showed up in mid-September 2021, the new Aptera had created vehicles with much more promise and plausible functionality.

Which brings us to Sol, the white Aptera sitting in the shop. Time to go for a ride.

Meet Daniel Morris, a 26-year-old engineer trained at UC San Diego. Because Sol is a prototype, R&T is forbidden from the driver’s seat. Morris will drive today. He’s been with Aptera for about six months, he says, which makes him one of the longest-serving employees. We climb in under the gullwing doors and head out the garage door. Even before we leave the premises, the plot thickens. Three “freedom seekers”—Aptera’s term for customers who have put down a deposit on a car—are mulling around in the parking lot. These Aptera superfans have come from afar to see the latest iteration. One guy, a retired airline pilot who arrived unannounced on a Royal Enfield motorcycle with North Dakota plates, explains that he can’t wait to get his Aptera because he wants to live in it—the two-seater has enough room under its weird rear hatch for a sleeping adult.

“I’ll plug in a little skillet so I can heat up my HotPockets,” he tells me. “I can be completely off the grid.” The other two freedom seekers come from Yuba City, California, and Reno, Nevada. They are what Aptera calls ambassadors, those who are actively promoting the brand already because they love the car and what it stands for.

Off we go, Morris and me, onto the streets of San Diego in Sol. The vehicle is a preproduction prototype. Its joints squeak and moan. The seal on the hatch door isn’t lined up. The front wheel covers wobble. Still, the vehicle is impressive, cornering confidently under acceleration and braking efficiently at stop signs. Early in our drive, Morris hammers the throttle into a fast curve, with a Jeep Cherokee speeding toward us in the other lane. All of Sol’s weight is loaded on the left-side front suspension. If it fails, we’re dead. But it doesn’t. Acceleration is brisk, giving off a spaceship whoosh. I pepper Morris with questions while we go.

Suspension? “On a basic level, the rear suspension is a single swing arm, like on a motorcycle,” he says. “The front is more like a double wishbone that you’d find on an open-wheel racing car.”

Because Sol is a three-wheeler (technically an autocycle), it can skirt many federal regs that four-wheeled cars must heed, Morris says. However, Aptera intends to put its autocycle through full four-wheeled testing anyway, to prove it’s safe.

All-wheel drive? “Yes, but not on this particular car,” Morris says. “This is two-wheel.” Which leads to an important point: Part of what makes the car unique is the placement of the electric motors—inside the wheels themselves, so the car can come as a two- or all-wheel-drive machine. Aptera has a contract with a third party called Elaphe to build the motors.

Traction control? “Not yet,” Morris says. He demonstrates by doing a mini-burnout at a stop sign. All the while, the reaction on the faces of San Diegans makes the ride a bit of a circus act. Pedestrians’ jaws drop in disbelief.

The Aptera is promising, but it’s still got a ways to go. Solar panels need surface area, and a low-drag design is only as good as the frontal area and body size. Our brief carom only hints at issues such as ride quality, durability, HVAC effectiveness, and thousands of other details. Buyers will expect an Aptera to be a fully realized car no matter how different it looks. Aptera’s co-CEOs have answers for all the questions I can muster. Will there be a dealership network? Probably not. They’re looking at more of a Carvana delivery-service kind of operation. A service infrastructure? They envision more of a Tesla-type thing, where trained technicians make house calls to fix stuff without storefront over-head. Also, with far fewer moving parts, electric motors typically don’t need as much servicing as internal-combustion engines.

Will there be different trim levels? Yep. The base-level two-wheel drive will start at $25,900, and there will likely be a federal rebate to bring the price down. A high-performance Aptera, the company promises, will knock out a 3.5-second0–60 time.

Finally, when will Aptera actually come up with a customer car?

“The schedule is aggressive,” Anthony says.“COVID has not made our life easy. But we hope to build 5000 vehicles in 2022, and we believe that is feasible.”

If Aptera can build it, the freedom seekers will come—hopefully with money.