Target has rolled out one of the most visible displays of its efforts to become a greener company: Massive carports topped with solar panels that will power a big-box store in California.

The panels, high above the parking lot, will produce enough renewable energy to power the entire store, from its refrigeration to its heating and air conditioning, the retail chain says. And the towering structures outside offer a striking visual clue into the environmentally conscious efforts going on inside the store.

In aisles with items like milk, ice cream and frozen pizza, refrigerators and freezers will use a natural refrigerant to cut back on emissions. All sales floor lighting has been replaced with LED, and back outside, customers who arrive in electric cars can charge them in the parking lot.

The Target location in Vista, Calif., about 40 miles north of San Diego, has become the company's most sustainable store — and could become a national model for the retailer. Target previously installed solar panels on the location's rooftop, which power a portion of the store.

John Conlin, senior vice president of Target properties, said the retrofit makes the location the company's first net-zero energy store. The chain expects the solar panels to produce 10% more energy than the store needs, which it will return to the local power grid. 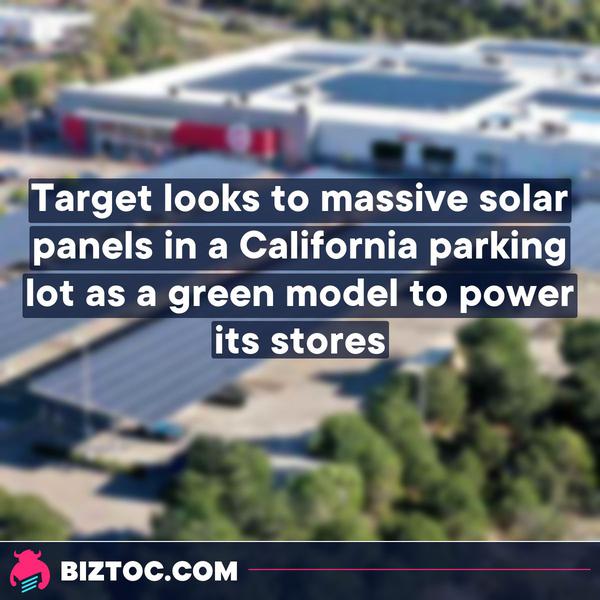 "This is a big step for us in terms of how we're testing and learning from innovations around sustainability," Conlin said.

Conlin, who oversees store remodelings and build-outs of new facilities, said the features could eventually be added to other locations in the chain. The company currently maintains solar panels on roughly 25% of its approximately 1,900 stores.

Target has said it wants to source 100% of its energy from renewable options by 2030 and plans to reach net-zero carbon emissions by 2040.

Last week, it debuted a new Target Zero icon that it will use to highlight products in stores and online that are designed to be refillable, reusable or compostable.

At the Vista store, Conlin said, customers will see explanations about behind-the-scenes green features that will inform them about the company's switch to the natural refrigerant.

A Target spokesman said the company will receive a one-time federal tax credit as part of the project.

For employees and customers, the carports will serve an additional purpose: coverage on sweltering or foul weather days for its Drive Up curbside pickup service, one of the company's top growth drivers for its e-commerce business over the past two years.

Environmental advocacy organizations have urged big-box and grocery stores to add more solar panels to their locations, saying the companies could dramatically expand the country's supply of renewable energy because of their massive square footage.