The dairy cows along Steamboat Slough in southern Sonoma County are used to the rumble of long, loud freight trains passing through on the Northwestern Pacific tracks, but they all turned their heads to watch Friday as a sleek, short and quiet solar-paneled rail car glided past.

They were witnessing the test runs of the team behind a green-energy powered bid to establish a new Guinness World Record on Saturday.

The team, led by Sonoma resident Eric Houston and his friend Marco Fucci di Napoli, will seek to add not only a new entry to the famed record book but test an open question: How fast can a solar-paneled rail car with no onboard energy storage go?

“We wanted to do something good for the planet in green, renewable energy,” said Napoli, 43, who lives now in Hawaii but was based until this year in Silicon Valley.

Their 42-foot-long, 10-foot-wide rail car is powered by a total of 23 55-volt solar panels and is expected on Saturday to reach about 25 mph.

But Napoli, a former software engineer manager at Google, and Houston, CEO of a system integration company, hope to hit 65 mph by doubling the train’s size — and power — within the year.

Their bid for the Guinness record books is said to be the first of its kind — hatched four years ago at a chance meeting of two men at a Mountain View bar.

The self-contained solar-powered rail car they built is also the first of its kind, said Napoli. It does not rely on any stored power from charging stations, instead converting all of its energy from the sun on the go.

That power is fed through an electric vehicle conversion kit that then energizes a set of wheels that move the train car, with a max capacity of three passengers.

With Napoli and Houston aboard, the goal on Saturday is to test the upper limit of solar energy as a form of rail transportation, said Houston, 45.

The two tech-minded partners, each with engineering backgrounds and a devotion to renewable energy, also just wanted to have fun and tackle a big engineering challenge, he said.

Friday’s tests, blessed by Northwestern Pacific Railroad, started south of Sonoma at the Schellville Depot, where Napoli, Houston and their team conducted safety tests ahead of Saturday. 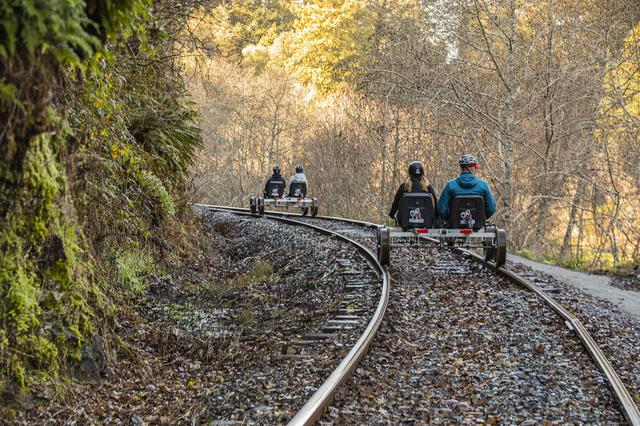 One obvious hitch in their timing? The wildfire smoke filling Bay Area skies and obscuring the sun, reducing the energy collected by the solar panels by about 30%, Napoli estimated.

Not ideal for a first entry in the record book, but a first nonetheless.

“It may be a comical record, but we’ll take what we get and what the sun will give us tomorrow,” Houston said.

The self-funded project, a part-time affair for both, has so far involved a volunteer team of engineers, electricians and brake specialists. The next phase will involve a search for sponsors, Napoli said.

The Solar Train came to life in an assembly job outside the Schellville Depot, the century-old train station that could double as a haunted house, with crooked doors, uneven floors, chipped sage paint and festooned with historic NWP Co. memorabilia.

The Solar Train is technically not a train, but a rail vehicle because it’s not pulling anything, explained NWP General Manager Ryan M. Martin. “But for all purposes, a ‘train’ works,” he said.

Martin, a rail enthusiast, said he was impressed when Napoli and Houston first showed him the contraption and amazed by how invested they were in their record-setting goal. They approached Northwestern Pacific months ago because it was near the Free Flow Wines warehouse, where the rail car was assembled and stored.

Years back, in the beginning stages of the engineering and tests, Martin said the train looked like a pingpong table with an IKEA chair in the middle.

Now, it looks like a Star Wars aircraft, he said. The seats are equipped to go in a race car.

Martin has been tasked with making sure the solar vehicle can safely operate on the railroad. That means it needed a kill switch in case the brakes fail. He also secured the track warrant so the team could test on the Northwest Pacific Railroad.

Napoli and Houston both said the best part of the journey was their first test run on Aug. 6, when the wheels powered by solar energy began to spin.

They didn’t anticipate the unevenness of the tracks and were relieved to see how the solar panels flexed under the strain while moving down the rail line.

Most of the Northwestern Pacific line dates to the turn of the 20th century, but the segment used by Napoli and Houston is younger — from the 1940s. The famed line used to stretch as far north as Eureka, but the freight terminus now is Windsor, where SMART is upgrading the tracks for passenger trains.

Sitting inside the aging Schellville Depot on Friday, Napoli and Houston reflected on their cutting-edge creation and said they hoped it would spur others working on the future of transportation powered by green energy.

“The best reward,” Napoli said, “would be if one year down the road we inspired someone else to to beat the record.”

You can reach Staff Writer Alana Minkler at 707-521-5224 or alana.minkler@pressdemocrat.com. On Twitter @alana_minkler.