It looks as though Subaru has its game face on this time with a vehicle that offers handsome, outdoorsy styling, decent fuel economy, and plenty of interior space.

The 2019 Ascent is an all-new design from Subaru, although not a brand new concept. The company tried the three-row crossover idea once before when it introduced the cramped, Edsel-faced Tribeca in 2005, but that venture was a flop. Sales fizzled over the years until production wheezed quietly to a stop in 2014.

Only time (and sales) will tell, but it looks as though Subaru has its game face on this time with a vehicle that offers handsome, outdoorsy styling, decent fuel economy, and plenty of interior space. The Ascent is also, according to Subaru, its largest vehicle ever. If it looks a bit like a blown-up Outback, it is, sort of. The Ascent rides upon an extended version of the modular Subaru Global Platform, the smaller version of which underpins the Forester and Crosstrek (expect to see all Subarus riding on the SGP in the not-too-distant future).

The concept cars Subaru has unveiled at auto shows over the past couple of years belie a daring approach to exterior aesthetic within the company’s design department. You won’t see much of that in the Ascent. It’s a family hauler whose most likely customers will be people who – in addition to wanting voluminous interior space and AWD peace-of-mind – are eager to grab some granola chic without rocking the dowdy style boat too much. The Ascent is accordingly conservative, if not a bit on the attractive side, and its pricing – which starts at $32,970 (including $975 destination charge) for the base model and $45,670 for the top-of-the-line Touring trim I tested – is comparable to other crossovers in its class.

Like the smaller, but very similar Outback, the Ascent will probably do well with safety-conscious family types who can’t quite square with the fact that they probably need a minivan. But let’s be real – the Ascent is basically a small, AWD minivan in crossover form. The only thing missing is the sliding doors, although the second-row doors are almost large enough to be just that.

A minivan in crossover clothing

The Subaru Ascent is an Insurance Institute for Highway Safety “Top Safety Pick+.”

Comfortable seats, a roomy interior, and 19 cupholders make for the ultimate American family car. The Ascent comes in seven- or eight-passenger configuration, and interior materials have a quality look, smell, and feel. The interior is tasteful and clean in its styling – nothing too fancy, but elegant enough for Subaru’s new flagship. An available panoramic moonroof sheds light on whatever chicanery is going down in the way-back seat. 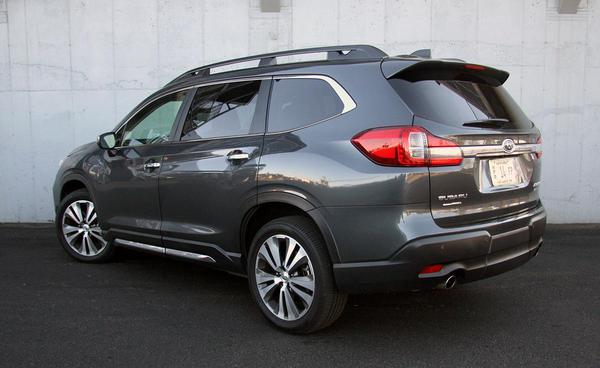 Perhaps because the Ascent isn’t a “real” minivan, it isn’t available with integrated seatback video screens for the kiddies, like, say, the Chrysler Pacifica. But Subaru will make up for the omission by cutting you a deal on iPads and headphones if you’re desperate to keep rambunctious offspring occupied on long trips.

With all three rows of seats in use – or at least in the up position – cargo volume isn’t overly impressive at just under 18 cubic feet. The space is comprised of a narrow strip of cargo floor behind the third row that’s just wide enough to accommodate a line of paper grocery bags and a large umbrella. If you have a stroller or some other bulky kid-related item, the groceries may have to go inside the car, where they’re at the mercy of tiny arms and hands that are likely to throw food items while the vehicle is underway (make sure, at least, to keep the eggs out of reach).

The third-row seat folds flat with ease, opening up the cargo space to more than 47 cubic feet. With the middle-row seat out of the way – the captain’s chairs on the Touring model I tested didn’t fold completely flat – cargo volume expands to 86 cubic feet. It’s a generous hold to be sure, but still not wide enough to pass the old four-by-eight-foot sheet of plywood test no one seems to care about anymore.

Safe as a Subaru

Subarus have a well-deserved reputation for safety, and the Ascent falls right into line with its stablemates. The Insurance Institute for Highway Safety (IIHS) named the Ascent a 2018 “Top Safety Pick+” and even awarded it extra points for including extra LATCH child safety seat anchor positions. The Ascent also has a best-possible 5-star overall safety rating from the federal government.

Heavy, but not thirsty

With enough power to deftly move its own weight, the Subaru Ascent can tow up to 5,000 pounds.

The 260-horsepower, turbocharged 2.4-liter flat-four that comes standard in all Ascent trim levels offers solidly decent performance. There’s enough power on tap to move around 4,400 to 4,600 pounds of big crossover with ease, and even tow up to 5,000 lbs., which has to be a first for Subaru. The engine’s full 277 pound-feet of torque comes on early – at 2,000 rpm – thanks to the turbo. Both around town and on the freeway, acceleration is sprightly, although full-throttle acceleration makes the engine emit a melancholy drone reminiscent of the underpowered Subarus of bygone days. Power is transmitted to all four wheels through a continuously variable transmission (CVT) that manages to avoid the rubber band feel such units can often have.

Subaru likes to tout the Ascent’s 8.7 inches of ground clearance, even if most owners will probably never need it. There’s also a feature called X-mode that optimizes the car’s AWD system for maximum traction on slippery surfaces. I’m sure it works great, but I didn’t have occasion to try it. With decades of snow-defeating Subarus in its family tree, there’s little doubt the Ascent will live up to its pedigree come winter.

For a vehicle as bulky as the Ascent, handling is actually pretty decent. The steering is quick, and body roll minimal. But don’t expect sports car nimbleness from this giant. A freeway slalom on the way to your kids’ soccer practice is one thing, but I doubt anyone is going to want to autocross an Ascent (until junior gets his license, which is another story).

Compared with other vehicles in the segment – the Ford Explorer, Chevy Traverse, Honda Pilot, and the Mazda CX-9, for example – the Ascent gets good fuel economy. The EPA’s 23 miles per gallon combined average fuel economy rating is right in line with what I got on my test loop. In highway mileage, it outshines its competitors. It should be noted, though, that according to EPA numbers, the higher weight associated with upper trim levels digs into the Ascent’s fuel economy a little bit.

A minivan that camps

Much like people did with station wagons in the ’60s and ’70s, and minvans in the ’80s and ’90s, everyone wants a crossover these days. And despite the fact that most families secretly want a minivan, their uncoolness makes them anathema to many. That makes the three-row crossover segment a smart bet for any manufacturer looking to appeal to families with more than one or two children.

Subaru is an unstoppable sales force in North America right now. The Ascent – which blends three-row practicality, good fuel economy, and competitive pricing with a hint of outdoor adventure cool – has the mojo to further boost the manufacturer’s relentless rise. Where else are you going to find a minivan-shaped crossover that looks as at home in the woods as it does in a suburban driveway?