Back in 2015, Jimmy Butler signed a five-year, $95 million contract. So if he wanted to, he could purchase just about any vehicle his little heart desires. And to be clear, he does have a few luxury rides, including a Rolls-Royce and a Cadillac Escalade, sitting in his garage. But during a recent interview with Sports Illustrated reporter Lee Jenkins, the Timberwolves star revealed that he prefers to drive a vehicle that’s a lot more, er, modest when he’s making his way around Minneapolis.

For the SI story, Butler conducted at least part of his interview with Jenkins while on board a private jet. But he admitted that he feels a lot more comfortable when he’s behind the wheel of a Toyota minivan that he owns. It has a big "Baby on Board" sticker on the back of it—even though Butler doesn’t have any kids and doesn’t even have a girlfriend at this point—and it’s a far cry from what you’d expect a (very rich!) guy like Butler to be driving.

So why the hell does Butler keep the minivan around? If you read Jenkins’ piece, you’ll quickly see that it’s because Butler is someone who definitely marches to the beat of his own drum. He loves country music, doesn’t pay attention to his NBA 2K rating like other NBA players, and recently went more than two months (!) without turning on the TV. And he seems to genuinely enjoy the fact that he has a minivan, even though those around him hate when he drives it.

"You own a Rolls-Royce and an Escalade!" Mike Smith, Butler’s training partner, tells him in the middle of the SI story. "Why do we always have to take this big-ass soccer mom car and listen to Garth Brooks?" 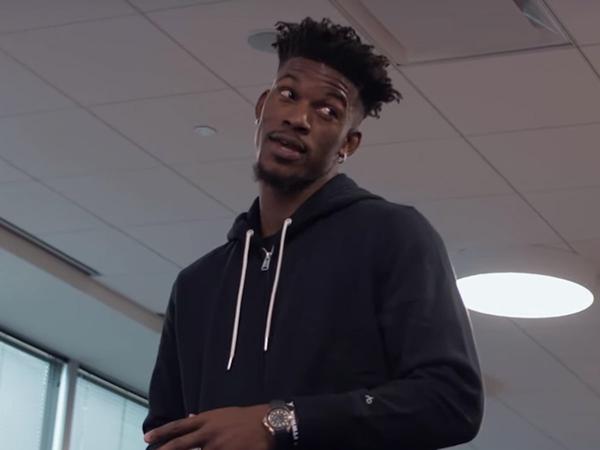 Jimmy Butler Shared His Cell Phone Number for Critics to Call Him, and He’s Actually Responding

He enjoys his minivan so much that, at one point in the story, Butler is actually driving around in his Rolls for a change since he’s in San Diego with the Timberwolves for training camp while the minivan is back in Minnesota. But he admits that he’d rather be driving his "big-ass soccer mom car" than his luxury ride.

"I miss it," he says. "Unfortunately, we have to use this thing just a little longer."

Elsewhere in the story, Jenkins points out that Butler does have another reason for driving a minivan on the regular, outside of doing it just to be an oddball. He writes about how the minivan—and more importantly, the "Baby on Board" sticker—are "partly aspirational" for Butler. Although he isn’t dating anyone at the moment, Butler admits that he wants to start a family soon and talks about settling down, which is where the minivan could potentially come in handy.

Butler isn’t the only NBA superstar driving around in a vehicle that’s way below his pay grade. Coincidentally, Jenkins also wrote a piece on Kawhi Leonard back in March 2016 that detailed why the Spurs star prefers driving a 1997 Chevrolet Tahoe over the Porsche that he pulls out on occasion. You can check out Jenkins’ full story on Butler here.