MENU
Home > Hatchback > Which 2022 Chevrolet Bolt EUV is Right for Me?

Which 2022 Chevrolet Bolt EUV is Right for Me?

The 2022 Chevrolet Bolt EUV is the first addition to the division’s electric vehicle range and comes as part of a major remake of the compact electric Bolt hatchback since it launched in 2017. Chevy has sold over 100,000 Bolts and looks to further expand its appeal by adding this crossover body style called the Bolt EUV.

The new 2022 Chevrolet Bolt EUV, a more spacious version of the standard Bolt EV, offers three inches more rear-seat legroom thanks to a similar gain in wheelbase and an overall length that’s up by six inches.

The Chevrolet Bolt EV and the Bolt EUV feature the same 200-horsepower electric motor and 65 kWh lithium-ion battery pack. But with the larger body on the EUV, which adds 90 pounds to the weight of the standard Bolt EV, its EPA-estimated range drops slightly from 259 to 247 miles.

Also new is a Dual-Level Charge Cord that can be plugged into a standard 3-prong 120-volt outlet for Level 1 charging or a 240-volt outlet for faster Level 2 replenishment. As an added bonus of Bolt EV and Bolt EUV ownership, Chevrolet will cover the home installation costs of a Level 2 Charger.

The Bolt EUV sports a handsome new look, improved interior quality, and surprisingly, a new, lower price. For 2022, Chevrolet has cut the price from $36,500 to $31,000 for the basic hatchback. That’s a $5,500 discount for a car that has been significantly upgraded in several ways. 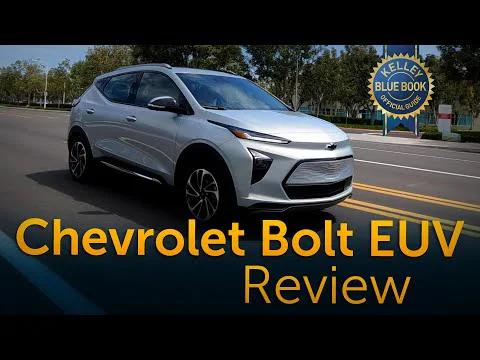 With the existing powertrain, it should remain a solid city runabout. However, keep in mind that the Bolt (along with other GM electric vehicles) are no longer eligible for a $7,500 federal tax credit.

Standard features on the Bolt EUV include LED headlights and taillights, cruise control, a 10.2-inch touchscreen, and a configurable 8.0-inch color gauge cluster. All Bolt EVs include a 1-pedal driving mode that allows you to bring the vehicle to a stop through regenerative braking by lifting off the accelerator.

Other options include driver-assist features such as rear cross-traffic alert and a 360-degree surround-view camera, plus wireless smartphone charging and a 4G Wi-Fi hotspot. Apps like Alexa and Spotify can also run on the Bolt EUV.

The Chevrolet Bolt EUV is available as the base LT, the Premiere, and Launch Edition.

Which 2022 Chevrolet Bolt EUV is Right for Me?

Ready to buy a Chevrolet Bolt EUV? Shop for one on sale now near you.