While the days of Japanese automakers keeping their coolest cars away from the North American market have ended up for the most part, there are still a few rare occasions of holding out the really special stuff from us Americans.

Perhaps the biggest current example of this is Toyota’s GR Yaris. Debuting in early 2020, the rally-bred GR Yaris is basically a modern throwback to cars like the Mitsubishi Lancer Evolution or Toyota’s own Celica GT4 of the 1990s.

It shares its name and basic body structure with the Yaris subcompact hatch, but that’s about where the similarities end. Under the hood sits a heavily breathed-on 1.6 liter turbocharged three-cylinder that makes up to 268hp.

And the boosted three-cylinder sends its power to all four wheels via a trick AWD system that can divert up to 70% of power to the rear wheels—and the only transmission is a six-speed manual.

Combine that with all of the other hot hatch essentials including special bodywork, larger brakes and cool seats and you’ve got one of the most impressive Toyotas in recent memory.

And all who have driven it seem to agree. The GR Yaris is praised for both its by-the-numbers performance and for its pocket-rocket fun factor.

But sadly Toyota has decided not to bring this heroic machine to the car-crazy American market, where there'd be no shortage of hungry enthusiasts ready to hand over their money.

There are a few reasons for this, but the biggest is that even the regular Yaris is no longer sold in North America, so the work and red tape navigation required to import just this specialty model would simply be too expensive. 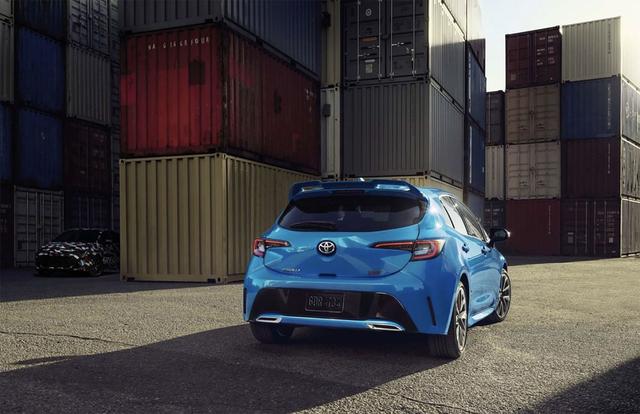 But hope is not lost. For a while now, Toyota has been hinting at a GR performance model built out of the slightly larger Corolla hatchback, which has been sold in the US since the 2019 model year.

Anyone who follows Formula Drift should be quite familiar with the Corolla hatchback as the car was driven by both Fredric Aasbo and now by Ryan Tuerck—albeit with a fully-custom RWD chassis underneath.

The rumors about a GR Corolla been swirling since Toyota announced the GR Yaris, and in the last couple of months Toyota USA has dropped some pretty exciting Easter egg teasers about what’s in store for this hot Corolla.

For more than a year now, Toyota has vaguely mentioned that a higher performance version of the Corolla hatchback was on its way, but a recent pair of cryptic, easter-egg laden Instagram posts have the rumor mill in high gear.

One of the posts, with the caption "Keep Them Guessing" shows the interior of a standard Corolla hatchback, but a closer look shows a few references to the GR version.

First there is the instrument panel which displays "G16" —Toyota's designation for the turbo three-cylinder in the Yaris. Then there's the climate display "268" which happens to be the GR Yaris' horsepower rating.

But even bigger, the upper right portion of the photo shows what's clearly a Corolla hatchback done in Toyota's now-famous GR camouflage.

That same camouflaged prototype also makes an appearance in the background of another Corolla Instagram post with the caption "Step out from the shadows into the spotlight."

Also note the text on the shipping container: "NA," which presumably means "North America," "G16" the engine code once again, and "GR Four," which is the name of the high-tech AWD system used in the GR Yaris.

Obviously, these teases are strategically planned, and while Toyota hasn't even mentioned the GR Corolla by name it feels like an official debut of this car is imminent.

We may only have these easter eggs to go by right now, but it's easy to get the sense that the North American GR Corolla will basically be the GR Yaris in Corolla packaging—and that's exactly what we want.

We still don't know what other upgrades will be made from the standard Corolla platform and pricing is anyone's guess, but it looks like the GR Corolla is going to be the real deal. And it will enter hot segment populated by cars like the Volkswagen Golf R, Subaru WRX and the Honda Civic Type R.

And speaking of the Civic Type R, Honda has recently been teasing the next gen model quite a bit, and if it's anything like the outgoing FK8 model, things are about to get real fun.

And as for the not-yet-official GR Corolla, it'll join a revitalized Toyota lineup that already has the GR Supra and the new GR86 along with more practical choices like the Camry TRD.

Needless to say, we can't wait to see what Toyota is working on for enthusiasts here in America and would love to see the Civic Type R and GR Corolla battle it out for Japanese hatchback supremacy soon.