As we previously discussed, one of the main concerns people have with the Tesla Model 3 is its trunk and cargo space in the back. Tesla CEO Elon Musk already confirmed that the company took care of the trunk opening, presumably to make it larger, and now we learn that the back seat will also be able to fold flat – leaving enough space to fit a body in the back (or for someone to sleep in it).

Bloomberg’s Tom Randall took a Model S on a road trip and he ended up sleeping in it – something several owners have done in the past, more famously Bjørn Nyland who popularized the ‘Camper Mode‘.

Randall went into the details of sleeping in a Model S and for the occasion, he also researched if it would be possible to do the same in the upcoming Model 3. He claimed it would be possible by citing “sources familiar with the final design” saying that the back seats will fold flat, something Elon Musk already hinted at, but he also added that the folded seats would leave 5’6” of space from the back of the front seats to the end of the trunk.

Bloomberg’s Stephanie Davidson came up with this representation of someone sleeping in the Model 3: 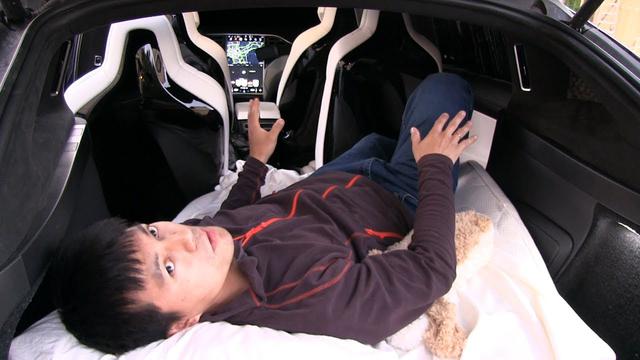 Obviously, this information is not only useful for people planning to sleep in their Model 3, which I would assume don’t represent the majority of the ~400,000 reservation holders, but more importantly to visualize a significant cargo space in the back.

We actually already had a pretty good idea about the back seats folding flat since Musk said that a bike will still fit “no problem”, but most people found the trunk opening in on the Model 3 prototype to be the bottleneck, not the space in the back:

But again, Musk now says that the trunk opening problem is also “fixed”. We should have a better idea of the fix during the unveiling of the final design, which Musk said will happen “closer to production” – likely later this year or early next year.