The 2021 BMW 4 Series Gran Coupe is also premiering this week in Munich. Celebrating the kick off of the 2021 IAA, BMW has decided to bring a series of new models to the iconic BMW Welt building. The new four-door coupe has recently made its online debut, but it is now time to open its doors to visitors.

Today, while visiting the BMW Welt, we had the chance to photograph the sleek and sporty 4 Series Gran Coupe. Painted in Aventurine Red, the four-door coupe stands out with its aggressive bodystyle and sportier design cues. Of course, the new gran coupe retains the 4 Series grille, which may be the most polarizing design cue of any BMW in history. 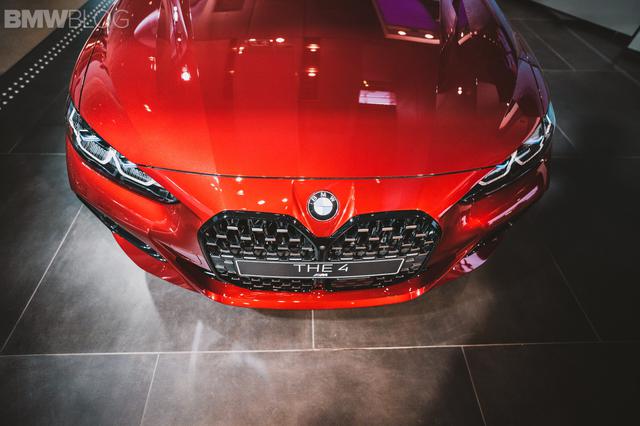 But the rest of the car gets a sleek and dynamics design, accentuated by a beautiful roofline. It’s also nice to see the i4’s flush door handles on the 4 Series Gran Coupe; they look cooler than the standard pull handles on the coupe. The hatchback trunk is extremely functional with a lot of cargo space.

Much like the BMW i4 M50, the new BMW M440i Gran Coupe features some more aggressive bits. For instance, it gets sportier looking wheels, trapezoidal exhausts, and M-style mirrors. In addition to the luxury niceties, the 4 Series Gran Coupe will get all of BMW’s typical fancy technologies. For instance, it will come available with BMW’s 3D View parking cameras, Parking Assistant, Reverse Assistant, and the Personal Driving Assistant Professional, the latter of which is BMW’s Level 2 autonomous driver aid.

The BMW M440i Gran Coupe will get a 3.0 liter turbocharged inline-six under hood, making 382 horsepower (374 horsepower in Europe) and 369 lb-ft of torque. Also like the coupe, the M440i Gran Coupe’s engine is a mild hybrid, with a 48-volt starter generator that acts as a small electric motor and can assist the engine with an electric boost of 11 horsepower. That increases both efficiency and power, giving the engine a boost under acceleration and sharpening the engine’s response off the line or at low rpm.

Just like the conventionally powered variants of the 4 Series Gran Coupe, the BMW i4 electric car with up to 530 hp is also built at the Munich plant. On the other hand, the two-door 4 Series Coupe (G22) and the BMW 4 Series Convertible (G23) are manufactured at the Dingolfing plant.