The all-new Alpina B4 Gran Coupe has been unveiled just weeks after the Buchloe-based tuning brand was acquired by BMW, and is thus officially named the BMW Alpina B4. The Alpina B4 is based on the BMW 4 Series Gran Coupe, and fills the gap between the BMW 4 Series and the BMW M4 Competition. The second-gen B4 even gains a pair of rear doors for the first time.

As with the firm's take on the BMW 3 Series, the Alpina B3, the new B4 uses a tuned version of the 'S58' twin-turbocharged 3.0-litre straight-six petrol engine, sending 495hp and 730Nm through an eight-speed automatic gearbox to both axles – slightly less power and 80Nm more torque than the 510hp M4 Competition.

Despite the power deficit and weighing 240kg more than the two-door M4 Competition, the B4 is actually 0.1 second quicker than the more hardcore car from 0-100kph – needing just 3.7 seconds for the sprint – and it just pips it for top speed, too, topping out at 300kph.

Modifications to the engine include bespoke turbine housings to improve boost pressure at low engine speeds, a larger intercooler, an upsized air filter system and an optimised cooling system. The gearbox has been reinforced too to cope with the substantially boosted torque output and is configured to send the bulk of the engine's power to the rear.

Like all Alpinas, the focus of the B4 is not just to improve driving dynamics, but the chassis also gets enhancements to improve overall comfort.

Alpina lists upgrades including new bulkhead reinforcement struts, stiffer bushings and mounts, bespoke front anti-roll bars and a unique spring-and-damper configuration among the hardware changes that give the B4 a distinct character. It also gets variable dampers and three different modes for steering response.

The brakes have been upgraded too, with four-piston calipers gripping 395mm discs at the front and floating calipers paired with 345mm discs at the rear. Drilled, lightweight composite discs are optionally available.

As is customary for an Alpina, the styling differences over the standard 4 Series are much more subtle than those of the M4. Unique bumpers, spoilers, exhaust exits, side skirts and badging are the obvious tells, plus there's a new interpretation of the brand's hallmark 20-spoke alloy wheel design.

Alpina says a new manufacturing process means these 20-inch wheels tip the scales at just 12kg each and are wrapped in high-performance Pirelli P-Zero tyres designed especially for Alpina. 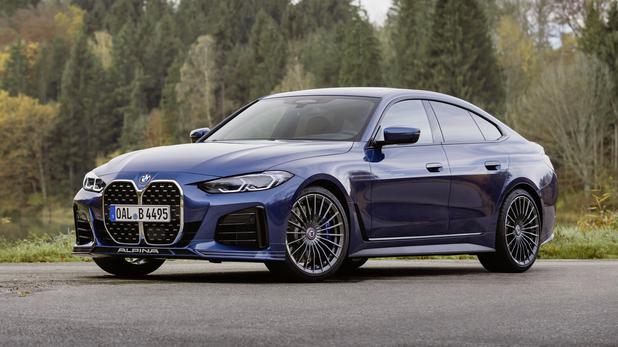