Part of the old-shape 3 Series line-up, the Gran Turismo seems like a model which vanished several years ago. Yet until recently, sales in China, always the car’s best market, were still strong: 12,551 were imported during the first nine months of 2021.

Launched in 2013, the ongoing success of F34, the 3 GT, presented BMW with a problem. Namely how to justify the cost of developing a replacement when not many people in other markets wanted a D segment hatchback.

The old F36 shape 4 Series Gran Coupé was an oddity in the brand’s line-up, due to its higher number and pricing but smaller size versus the 3 Series Gran Turismo. The 4 GC was 4,628 mm long with a 2,810 mm wheelbase, while the 3 GT, also a five-door hatchback, measured 4,824 mm and had a generous 2,920 mm between the axles.

Boot volume is up by a handy 39 litres to 470, expanding to 1,290 when the 40:20:40 backrests are dropped. It’s also a good shape, the loading sill isn’t too high and electric opening/closing is standard.

Even with the transmission tunnel’s ingress, there is genuine room for three adults (or three child seats) in the rear compartment, although those above six feet tall might prefer to sit up front.

The instrument pack is the now typical BMW digital gauges, there’s a large dash-mounted screen angled towards the driver, heating and cooling controls are physical buttons, and the company’s centre console-mounted Controller features. Meanwhile, there are two USB slots up front and a pair for the back seat occupants too.

Deliveries are just beginning in European countries, the UK being potentially one of the most important of these. Production is at BMW’s main plant in Munich on the same line as the i4, 3 Series Sedan and 3 Series Touring. The 4 Series Coupé and Convertible are built in another Bavarian plant, that being Dingolfing. The platform for all these models is CLAR WE. 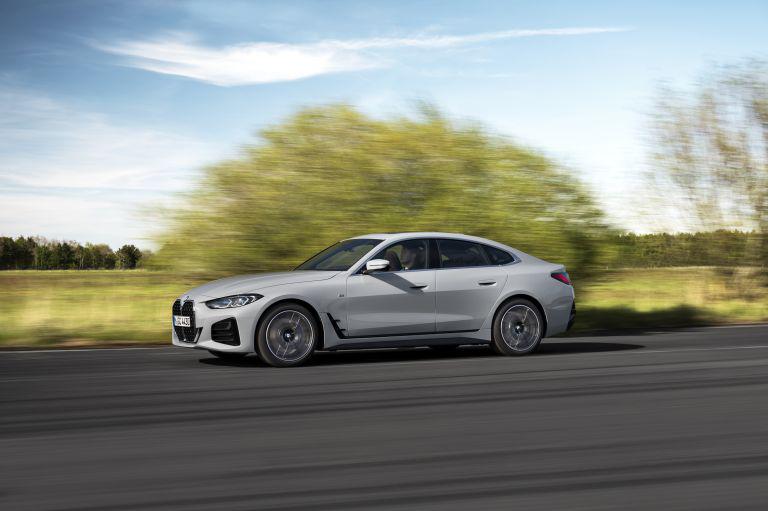 The new 4 GC isn’t yet available in the PRC so it’s too early to know how it being inevitably more expensive yet smaller than the 3 GT will be received. BMW hasn’t said anything about local production so all cars will be sourced from Germany.

Not everybody likes the new-style grille which continues to appear on so many of the brand’s cars but compared to how the front of the M4 looks, the 4 GC is much less dramatic.

Certainly, the new double kidney design stands out but perhaps the hatchback’s other details soften the shock? They include blue elements in the headlights, an aero look for the mirrors, the long curve of the roofline, pillarless doors, wide B pillars, dark full-width tail lights and flush door handles. BMW’s usual excellence in alloy rim design helps too – there are several very attractive options.

Something which the straight-six petrol and the diesel have in common is mild hybrid technology. In each case, there’s a 48V starter-generator and this gives you an extra 8 kW (11 PS) for short bursts of extra energy which mainly comes into play from a standing start.

Virtually all the energy for the ISG is gathered from braking. It’s stored in an additional battery and this is also used to power many of the car’s on-board components via a 12V system.

All cars have a ZF eight-speed torque converter transmission, branded by BMW as a Steptronic. There’s also an optional Steptronic Sport transmission (standard for the M440i xDrive) which allows more rapid shifting via steering wheel paddles. When the driver holds the left one for more than a second, a ‘Sprint’ function is activated, which switches all relevant settings to Sport and gives an extra burst of power.

The most powerful variant comes with special 18-inch wheels and an M Sport differential with electronically controlled locking function in the rear diff. Desirable as it is – once you’re driven the M440i xDrive, the four-cylinder diesels don’t quite compare – BMW hasn’t made it an exclusive for the 440. It’s also available for the 430i but only when M Sport suspension or adaptive M suspension is specified.

Certain additional options will become available from March (mainly interior trim packages) but for the moment, BMW hasn’t said anything about extra engine choices. Potentially, there could be a six-cylinder diesel as per the 430d xDrive Coupé and M440d xDrive Coupé. They are powered by the same 3.0-litre diesel, outputs being 210 kW (286 PS) and 650 Nm or 250 kW (340 PS) and 700 Nm.

Let’s see what 2022 brings for the 4 Series Gran Coupé – that huge torque output of the two-door M440d surely makes it the most desirable variant of all, not counting the M4 of course. For now though, the M440i xDrive is the pick of the hatchback model range.