BMW loves a niche car category more than most, and nothing demonstrates this more than the arrival of the 4 Series Gran Coupe. That’s because – and forgive all the numbers – the 4 Series is essentially a two-door version of the four-door 3 Series. Then the Gran Coupe adds those two doors back again. Confusing, right?

Well you’d think so, but considering more than 600,000 Gran Coupes have been sold, and the fact it’s the best-selling 4 Series derivative, buyers clearly don’t agree.

Now BMW is back with a second-generation version, around a year after the launch of the standard Coupe. Bringing that car’s divisive styling – predominantly from its imposing grille – and its high-tech interior, this new Gran Coupe is bigger and therefore roomier than its predecessor. But next to rivals like the Audi A5 Sportback and Volkswagen Arteon, is it good enough?

BMW offers four engines on its Gran Coupe at launch – three petrol and one diesel.

The flagship M440i meanwhile produces a healthy 369bhp, and allows for a 0-60mph time of just 4.5 seconds. It’s worth noting all Gran Coupes these days use an automatic gearbox too. 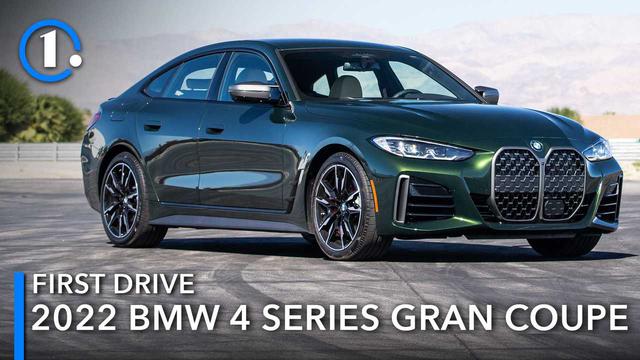 The only 4 Series Gran Coupe we’re yet to have a go in is the 430i, but it’s safe to say we’ve been very impressed by the rest of the range. Though the 420i can feel a little short of power, the 420d’s plentiful torque actually makes it the pick of the range, and it would be a superb car to live with on a daily basis, especially if you have a longer commute.

Meanwhile the M440i is something a little bit more boisterous, with its generous power reserves and rich engine sound making it feel every bit the junior ‘M’ car. Regardless of which variant you go for though, this is a brilliant car to drive, feeling engaging and involving, traits that you don’t find in the rivals from Audi and Volkswagen. It’s worth optioning the adaptive dampers, though, because with these you have the option to switch between comfort and sport settings, depending on your needs. The ride is particularly impressive in the ‘comfort’ mode too.

The interior of the previous 4 Series Gran Coupe was really starting to show its age, but BMW has firmly addressed that with its new car. Thanks to a large touchscreen and standard-fit digital dials, it feels especially modern. As is to be expected from a BMW, the material quality is top notch throughout, while the general ergonomics and usability really are first rate.

A big advantage to choosing the Gran Coupe over the standard 4 Series is because of its added practicality. Thanks to those two extra rear doors and stretched size, there’s a lot more room for passengers, though headroom in the rear does remain a bit compromised for taller passengers, due to the sloping roofline. On the plus side, the 470-litre boot is very generous, while the hatchback-like opening actually makes it more useful than a regular 3 Series saloon.

Standard equipment is already very generous, though, including a 10.25-inch touchscreen, digital dials, adaptive LED headlights and a parking assistant.

The 420d is also that bit more expensive, with a £44,000 starting price, but is worth the extra expense as it’s generally far more pleasant than the 420i.

BMW’s 4 Series Gran Coupe is a truly excellent model from this German brand. Combining sportiness with everyday usability, it’s undoubtedly the pick of the 4 Series line-up.

Though the styling won’t suit all, if you can live with the looks, it’s without question the leader of this ‘four/five-coupe’ class due to its sheer breadth of talents.