The ongoing conflict in Ukraine has forced Ford to halt production of the new Focus. The supply chain disruption is linked to the new 13.2-inch Sync4 infotainment screen that had been added to the Focus range as part of the model’s 2022 facelift. However, since the outbreak of war in Ukraine, one of Ford's major suppliers have said they are unable to meet the demand for key components.

In a message on its website, Ford says "due to customer demand and supply chain disruption, new factory orders are currently unavailable on new Focus." A spokesperson for Ford has told HonestJohn.co.uk that the pause in production is a "short term measure".

"Supply of these parts are being moved to a new location in Europe but until this is up and running, the 13.2-inch screen with Sync4 will not be available to customers. We will continue to build the updated Focus with the 8-inch screen. We apologise to customers for the inconvenience that this will cause but trust they will understand the exceptional circumstances.

The new Ford Focus hatchback and estate are currently delayed due to the ongoing conflict in Ukraine. The problem is linked to the new 13.2-inch Sync4 infotainment system in the 2022 Focus that requires a number of new-gen semiconductors and components.

Ford says it hopes to restart Focus production soon with orders limited to cars with the 8-inch infotainment system only. Prices will start at £22,965 and deliveries could start in the late-summer 2022. The new Ford Focus will rival the Vauxhall Astra, Hyundai i30 and Mazda 3.

The updated Ford Focus is available as a hatchback or estate. Buyers will get the option of a sporty ST hot hatch or rugged Active body styles, with the former being powered by a 280PS version of Ford's 2.3-litre EcoBoost petrol engine.

The 2022 Focus gets a new bonnet design that increases the height of the nose, while the Ford badge has been moved from the bonnet lip to the centre of the grille. LED headlights are standard on all Focus models and feature integrated fog lights at the front. The rear LED tail lights have also been redesigned with a darker central section and a new loop light pattern.

The Performance-inspired ST-Line model gets a trapezoidal upper grille, supported by a gloss black honeycomb finish alongside large side vents and a deeper lower grille. ST-Line variants also feature side skirts, a rear diffuser and a new rear spoiler.

The rugged Active model takes SUV design cues from the Kuga with a wider upper grille and taller side vents that are supported by plastic body cladding.

When available, the 2022 Ford Focus will be fitted with the latest Sync4 infotainment system. This will be displayed on a new 13.2-inch landscape touchscreen that also houses all of the controls for heating and ventilation, which means all of the physical buttons for these systems are now gone. 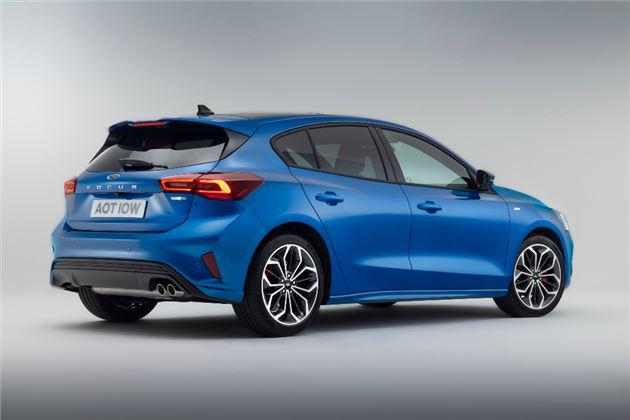 Ford says it has fitted advanced new speech recognition tech that will allow the driver to access everything from entertainment, phone calls and text messages to climate control and weather information without having to lift a finger from the wheel.

The Focus also gets Connected Navigation that includes real-time and predictive traffic information delivered by TomTom, with Garmin supplying rerouting tech to suggest the most efficient routes. The driver will also get live weather updates and local parking information.

The 2022 Ford Focus is available with petrol, diesel or mild-hybrid petrol engines. The familiar 1.0 EcoBoost is offered with 125PS, with advertised fuel economy peaking at 52.3mpg and power delivered to the front-wheels via a six-speed manual gearbox.

A 1.0 EcoBoost 48V mild-hybrid engine provides improved performance and can be specified with 125PS or 155PS, with the latter returning an official 49.6 - 53.3mpg. EcoBoost Hybrid buyers also get the option of a new seven-speed dual-clutch automatic gearbox.

Performance fans get the Focus ST with the 2.3-litre EcoBoost petrol engine. Maximum power will be a potent 280PS but fuel economy will officially be just 35.3mpg.

The sole diesel offering is a 1.5-litre EcoBlue engine that produces 120PS and returns an advertised 56.5mpg to 61.4mpg. This can be paired with a six-speed manual or eight-speed automatic gearbox.

Before you step into a showroom, read our in depth guide to all the new cars coming in the next 12 months and beyond – some are well worth the wait.

1How much is the new Ford Focus?

2Is production of the new Ford Focus delayed?

Yes, Ford has temporarily halted production of the new Focus due to disruption caused by the Ukraine conflict.

In a statement to HonestJohn.co.uk, Ford said: "As a result of the ongoing conflict in the Ukraine, one of our suppliers of parts for the updated Focus has indicated that they are not able to satisfy demand for parts. These parts relate to the 13.2-inch SYNC4 screen that was part of the updated Focus reveal.

'Supply of these parts are being moved to a new location in Europe but until this is up and running, the 13.2-inch screen with SYNC4 will not be available to customers.'

Yes, there is a new Ford Focus ST in 2022. The updated model will be powered by Ford's latest 280PS 2.3-litre EcoBoost petrol engine that will cover 0-62mph in less than six seconds. Prices for the Focus ST hatch start from £34,385 while the Focus ST Estate will be available from £35,785.

What damage can misfuelling do?

My son has a 5 year old diesel car and told me that he had a half tank full (about 28 litres) of premium diesel in it and then went to top up to full but accidentally put about 4 litres of petrol in. After realising this he topped up as intended with about 28 litres of premium diesel giving overall a full tank. He has done about 20 miles since with no noticeable effect and is wondering if it is likely to cause any driving problems /damage to the engine. Putting petrol in petrol into a diesel engine can be very serious. Petrol doesn't have the same lubricity properties as diesel fuel, which means more friction and heat. It could mean wrecked fuel pump, injectors, pipes, filters – or even a whole new engine in a worst-case scenario. The only way to be sure that the engine is safe from damage would be to get the fuel tank drained and fuel lines cleaned. If your son doesn't want to do this, adding fuel lubricity additives to the tank regularly and keeping it above half full for 2000 miles might allow him to get away with it. But your son will be taking a huge risk with his car. I would be inclined to get the fuel tank drained and cleaned by a professional.Answered by Dan Powell More Questions Ask HJ

I have a Honda Jazz with 5 years free servicing and I’ve been reading on a Jazz forum that it’s actually a variable service plan, which apparently means that after the first service the dealer will probably not change the oil. Have you heard of this type of service? The dealer didn’t explain this when I ordered the car. This is quite common with dealer service packages. I am not a fan of them personally - oil can lose its lubricity over time and this increases engine wear and tear. Replacing the filter also keeps the oil clean and ensures the engine runs smoothly and efficiently. That's why I recommend an oil change every 12,000 miles or 12 months (whichever comes first)Honda has does an excellent reputation for reliability, but I would probably retain the annual oil change if you plan to keep the car for the long term.Answered by Dan Powell More Questions

Find A Used Car For Sale