Despite BMW claiming it to be a sporty alternative to the 3 Series, the new 4 Series is more of a GT car than anything else. In fact, it’s one of the best GT cars the brand currently makes, like a baby-8 Series. Like the 8 Series, the new BMW 4 Series is offered three body styles; coupe, convertible, and gran coupe. All three cars have their strengths and weaknesses and their target audiences. So we’ll go through each one, to see which one is best for you.

This is the standard car. The Coupe was the first variant of the 4 Series to debut and it’s sort of the bread and butter of the bunch. It’s you’re standard two-door, four-seat coupe from BMW but it leans more on the side of grand touring than it does sports car. Though, that’s not an insult. The 4 Series Coupe is an outstanding coupe if that’s the sort of car you want; it’s smooth, comfortable, handles well, and even the entry-level engines are punchy enough.

Though, I wouldn’t recommend it as an everyday car for someone with a family, for obvious reasons. Its back seat is quite small (though, honestly not bad for a coupe of its size) and two car seats would be tricky. Surprisingly, it has a nice trunk, though.

Who’s the buyer? I’d say the 4 Series Coupe is perfect for someone who either doesn’t have kids or whose kids are old enough to drive themselves but also wants to travel a lot. As a long-distance cruiser, it’s actually genuinely difficult to beat the 4 Series for the price. 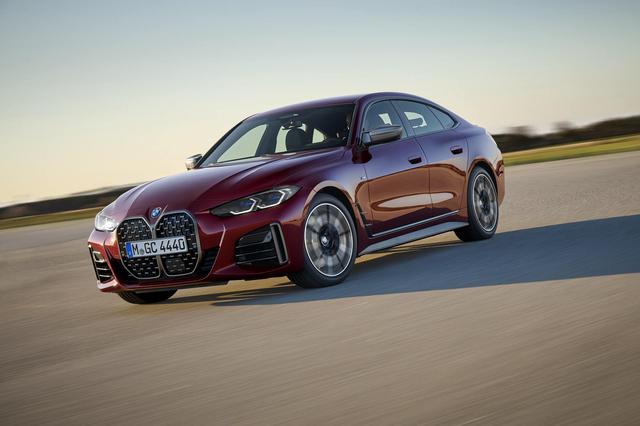 The BMW 4 Series Convertible is essentially the same car as the coupe, only, ya know, convertible. The soft-top is what’s new for this car, though. The previous-generation 4 Series Coupe used a folding hard-top, which was bulky, heavy, far more complex, and unsightly when up. Switching to a soft-top was a smart move for BMW. Not only does it look better when up, as fabric roofs are more elegant, it’s far lighter, less complicated, and faster to fold down.

Again, the 4 Series Convertible isn’t recommended for anyone with a family unless you have another car to act as your do-it-all family vehicle. However, as a long distance cruiser, it’s even better than the coupe. Dropping the top adds several things to the experience: exhaust noise, wind in your hair, and all of the sounds and smells of the environment around you. Driving a convertible is a more visceral experience and it will add to the driving pleasure of the 4 Series.

Who’s the buyer? The 4 Series Convertible buyer is the same buyer as the 4 Series Coupe, so long as the buyer lives in an area with nice enough weather to justify buying a convertible.

Now we’re shaking things up a bit. The BMW 4 Series Gran Coupe is possibly the most oddly named vehicle on the planet. For starters, it has the word “coupe” in its name, despite not actually being a coupe, as it has four doors and a hatchback. I know, I know, technically “coupe” doesn’t mean two-door but that’s sort of the automotive meaning the word has taken on. Secondly, the 4 Series Gran Coupe is a four-door version of a two-door car. So it’s a bit of an oddball.

That said, the 4 Series Gran Coupe is, overall, a good looking car with a very practical hatchback trunk. That makes it more practical than even the cheaper 3 Series sedan. Styling-wise, it looks like a 4 Series Coupe that’s been stretched to fit two extra doors. However, there’s on noticeable styling difference — the door handles. They’re flush, similar to the BMW i4, which sort of distinguishes it a bit.

Who’s the buyer? The 4 Series Gran Coupe buyer is different from the others. It’s more of a 3 Series buyer that wants a bit more style. The 4 Series Gran Coupe gets the same funky new grille and sleek taillights as the rest of the 4 Series gang. For customers that dig that sort of thing but want a sedan, the 4er GC is perfect, as it offers the interior space of a 3 Series with the style of 4 Series. The bonus is that it actually gets a bigger trunk than all of them.