Admit it: While watching the gas pump digits flicker, then blur — ever faster lately — you’ve wondered what it would be like to plug in an electric car at home and drive past gas stations, glancing at the price per-gallon only to marvel at your good financial sense.

Then the pump handle clicks, the daydream is over, and you’re $45 to $90 poorer.

For many, the argument for making the switch from a gas-powered vehicle to a plug-in electric — or at least a hybrid — only becomes stronger when hearing the latest from environmental organizations, such as the United Nations’ Intergovernmental Panel on Climate Change. The IPCC’s recent updated assessment reports that the window for action — significantly reducing greenhouse gas emissions — is closing if the world is going to hit its mark of keeping global warming to 1.5 degrees Celsius this century, avoiding the worst effects of climate change that increase with every tenth of a degree over the Paris accord’s goal.

The IPCC concluded in its latest assessment, released earlier this month, that emissions of carbon dioxide and other greenhouse gases must decrease by 43 percent by 2030, compared to 2019’s emission levels. And by 2050, the decline in emissions from fossil fuels must hit even higher marks: 95 percent for coal, 60 percent for oil and 45 percent for natural gas.

While reductions are necessary from the broad range of greenhouse gas sources — electricity generation, buildings, agriculture and industry — electrifying transportation offers among the best opportunities for reducing carbon emissions, particularly in Washington state. Nationwide, about 29 percent of greenhouse gas emissions are generated by transportation; for Washington state the percentage is even higher, 45 percent.

The bright note in the IPCC report: The costs for clean energy technologies have fallen steadily since 2010. Solar energy generation costs have fallen 85 percent, wind by 55 percent and for lithium-ion batteries — used to power electric vehicles — by 85 percent.

But advancements in battery and other technology are driving down prices for electric vehicles. While market-leading Teslas range in price from $45,000 to $132,000, far more affordable EVs are already available from Nissan, Mazda, Hyundai and Mini Cooper, for instance, ranging from $21,000 to $27,000, factoring in a $7,500 federal tax credit available for most EVs.

And that trend in affordability is expected to continue. By 2027, most electric vehicles are expected to be cheaper to produce than gas and diesel-powered cars, SUVs and light trucks, according to a forecast by BloombergNEF, and are likely to be in higher demand than gas and diesel vehicles. Automakers already are preparing for that shift in demand. General Motors announced more than a year ago it would sell only zero-emission vehicles by 2035. 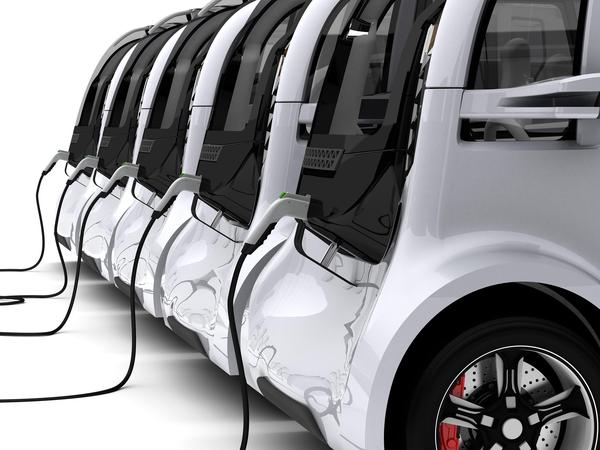 The cost of electric vehicles might have been even cheaper had state lawmakers acted fully on Gov. Jay Inslee’s request at the start of the year to use $100 million in the state budget for a matching $7,500 state rebate program. The Legislature, in its supplemental budget, however earmarked $25 million for EV incentives but didn’t specify eligibility requirements for rebates, leaving the details to the state Department of Commerce.

The Legislature, however, did invest in the state’s EV charging infrastructure, appropriating $207 million to add to the network of charging stations, as well as setting aside $95 million for next year’s legislative session for other EV incentives and investments.

Also included in the transportation package, lawmakers revived a provision that sets a goal that all new vehicle sales by 2030 will be electric vehicles only, essentially sidelining the sale of new gas- and diesel-powered vehicles. The legislation started out last year as a mandate, was amended to a goal when the state Attorney General’s Office pointed out it was likely to face legal challenges, then vetoed by Inslee because it was tied to a transition to a road usage charge in lieu of the state’s gas tax.

This year, freed from the road-usage charge debate — which state lawmakers and officials still will need to address soon as revenue from the gas tax continues its decline — the EV goal was made law.

Even as a goal, rather than a mandate, the 2030 deadline drew backseat complaints from Republicans — in the minority in both chambers — who were largely shut out of negotiations for the transportation package, objecting to the state imposing its choices on what people can purchase.

“They want to force everybody into an electric vehicle for whatever reason they deem fit,” Sen. Curtis King, R-Yakima, the ranking member of the Senate Transportation Committee, told The Seattle Times.

Let’s review the reasons: Electric vehicles are cheaper to operate and maintain, and getting cheaper. Their purchase price is expected in the next few years to be on par with or cheaper than conventional vehicles. And electrifying transportation — especially in Washington state where utilities are increasingly phasing out coal-generated power, including Snohomish PUD, which now boasts 95 percent carbon-free electricity — offers an unmatched opportunity to significantly reduce greenhouse gas emissions.

It’s a fair argument to make that — with all the above being true — requiring all new cars sold in the state by 2030 be electric may not be necessary, that market demand should take care of the transition to EVs. But there is a need for state government and elected representatives to show a commitment to that carbon-free shift, a commitment that appears supported by state residents.

A poll of 1,000 Washington residents in 2020 found that nearly 6 in 10 either strongly supported or somewhat supported an EV mandate for new cars by 2030; 29 percent strongly and 30 percent somewhat; and 42 percent in the same poll said they believed state government wasn’t doing enough to address climate change.

It’s a good bet that now, two years later, support for the transition to electric vehicles is growing with every flicker of the digits at the pump.